Celebily
Home Actresses Does Emilia Clarke Have A Boyfriend or Husband?

If you’re a fan of the Game of Thrones franchise, you’re probably familiar with Emilia Clarke, who portrayed the role of Daenerys Targaryen in the widely acclaimed hit series. After her outstanding performance in the series, Clarke has received worldwide recognition and many accolades. She began her acting career in 2009 with her first film appearance in the British medical soap opera “Doctors”. Since then she has starred in several blockbuster and thriller films.

Beyond her stunning acting career, the actress has won the hearts of her many fans who have followed her stunning looks. In 2014 she was named the most desirable woman in the world by AskMen, and the following year she was named the sexiest woman in the world by Esquire Magazine. In 2019 Time Magazine named her one of the 100 most influential people in the world. Read on as we guide you through Emilia Clarke’s interesting career path and details of her love life.

Who is Emilia Clarke and Where’s She From?

The gorgeous actress was born Emilia Clarke on October 23, 1986. She is the daughter of Jennifer Clarke and her husband, who is from Wolverhampton. Her mother worked as a senior executive for a world-renowned management consultancy firm, while her father is a theatre sound engineer. Although Emilia was born in London, she grew up with her older brother in the county of Oxfordshire in southeast England.

Emilia’s passion for acting was awakened after seeing the musically acclaimed film Snow Boat at the age of 3, which led her to take part in the theatre productions at her school. She first enrolled at the Rye St. Antony School, Oxford, before moving to St. Edward’s School where she completed her high school education. During her time at St. Edward’s School, she appeared in the productions of West Side Story and Twelfth Night.

After leaving high school in 2005, Clarke applied to study drama at the Royal Academy of Dramatic Art, the Guildhall School of Music and Drama, and the London Academy of Music, but her applications were rejected. However, she was later accepted into the Drama Centre London, where she graduated in 2009. There, Clarke took part in various stage productions, including Sense, a play produced by her school in collaboration with the Company of Angels.

Details of Her Acting Career

Soon after leaving the Drama Centre London in 2009, Emilia Clarke did various odd jobs while auditioning for film roles. She appeared in two commercials for Charity Samaritans and played the role of a victim of domestic violence. Clarke also appeared in Drop the Dog, a short film produced by the University of London. Finally, in 2009, she received her television role in the British soap opera Doctors.

The following year she made her film debut, playing the role of Savannah in Triassic Attack. Emilia’s groundbreaking role is undeniably her role as Daenerys Targaryen, also known as the Dragon Queen, in the action-thriller series Game of Thrones. The award-winning television show, which ran successfully for eight seasons, earned the leading actress high praise from audiences at home and abroad.

Before the Daenerys’ role in the GOT franchise came ashore, actress Tamzin Merchant was the original cast for the role. After the pilot episode, however, Tamzin was replaced by Emilia. Clarke played the lead role in the full eight seasons of the series, which ran from April 2011 to May 2019. Emilia has received several awards for her outstanding performance, including the 2011 EWwy Awards for Best Supporting Actress in a Drama Series and many more.

In addition to Game of Thrones, the English actress has starred in several high-profile films and television shows. These include Terminator Genisys, where she has played the role of Sarah Connor, Me Before You, Last Christmas, Solo: A Star Wars Story, Spike Island, Last Christmas, Voice from the Stone, and Above Suspicion, among others.

While Emilia Clarke has been incredibly successful in her acting career, many fans have asked questions and wanted to learn more about her love life. Meanwhile, the actress, who claims to be a feminist, is still single and not yet taken. Clarke is known to be very discreet when it comes to her private life. However, we know that she has been in a few romantic relationships so far.

Her first publicly known boyfriend was the American actor/comedian Seth MacFarlane. The date of the two lovebirds began in September 2012, but their relationship didn’t last long as it broke up a few months later. Seth MacFarlane is famous for his first-class TV animated series Family Guy. As their first publicized relationship, Clarke and Seth made several headlines while they were together. After their separation, they continued to be good friends. 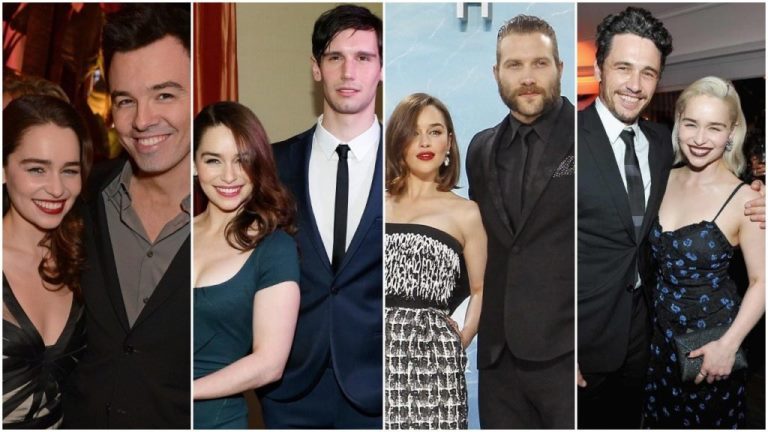 After she and Seth found time for their relationship, Emilia Clarke began another relationship with Cory Michael Smith, with whom she starred in Breakfast at Tiffany’s Broadway performance at the Cort Theater in 2013. Clarke and Smith were attracted to each other and got along well on set. Unfortunately, their romance ended a few months later.

More than that, during the production of the GOT series, there was a rumor that Emilia was dating her GOT star, Jason Momoa. In the meantime, Momoa played the lead role as her love interest in the series, and sometime before the death of Momoa’s character, they became a couple. The rumors fell silent, however, after it was found out that Momoa is happily married to American actress Lisa Bonet. The couple married in 2017.

Rumor has it that Emilia was also dating Kit Harrington, a popular English actor, and co-star of Game of Thrones. However, the star actress claims that she and Harrington were just best buddies and nothing more. Her last relationship was with the Australian film star Jai Courtney. The duo began their relationship in 2015 when they were sitting on the set of the 2015 thriller Terminator Genisys. Just like their previous relationships, Emilia and Courtney separated after a while. Emilia Clarke is currently single and concentrates her energy on building her career as an actress.