Sylvester Gardenzio Stallone is a famous actor, film director, and screenwriter whose work dates back decades. The American action movie actor was born in New York in July 1946 and has been working in the film industry since 1970, although his big breakthrough came in 1976 with his debut film “Rocky”. Sylvester has a remarkable reputation and worldwide fame in various countries where his films have been sold. His unique physique and body measurements, his charming appearance, and his incredible use of ammunition are some of the main characteristics that fans recognize about him. Sylvester Stallone’s wife, daughters, mother, and father have also had a significant influence on the actor’s screen efforts. The actor had a great interest in action and enjoyed watching boxing events. He is said to have written the screenplay for Rocky after watching a boxing match between Muhammad Ali and Chuck Wepner for three days in 1976.

Stallone’s father was Frank Stallone Sr., an Italian-American who was a hairdresser and lover of polo. Stallone Sr. had his very first and only film appearance in the 1976 film of his son Rocky, in which he played the role of the timekeeper. Late in his life, in 2010 at the age of 90, he wrote the book Stewart Lane, a story about a couple trying to renovate an old country house in ruins. He died at the age of 91 from the consequences of prostate cancer. He married Jackie, Sylvester’s mother, in 1945, but they separated in 1957. They had two children together, the other was the singer Frank Stallone.

The mother of Sylvester Stallone is Jacqueline Stallone, 94, an American astrologer, promoter of women’s wrestling (now you can see where Stallone got his love for wrestling from) and a former dancer. Jackie Stallone is a rather controversial celebrity, she had TV appearances on the Howard Stein Show where she claimed that the actor’s father wanted to have an abortion, she also appeared on the British TV series Celebrity Big Brother and Through The Keyhole, a BBC TV show.

Jackie has undergone excessive plastic surgery which has given her a horrible appearance. She also refers to herself as “botched.” Surgery doesn’t seem to go down well with her at all. Back when she was pregnant with Sylvester, she underwent surgery during his birth, which resulted in paralysis of the left half of his face including parts of his lips, tongue, and chin. The actor followed in his mother’s footsteps and underwent various plastic surgeries to solve the facial problem, but at some point, this did not go down well with him.

Nevertheless, he managed to overcome these difficulties and became one of the most celebrated action movie actors in Hollywood. At some point, he even starred in the famous James Bond series.

The actor was married three times and divorced twice. His marriages produced a total of five children – two sons, one of whom is late, and three daughters.

He was married in 1985 to actress and model Brigitte Nielsen, whose relationship was widely publicized by the media. After 19 months of marriage, they were divorced in 1987 without children. 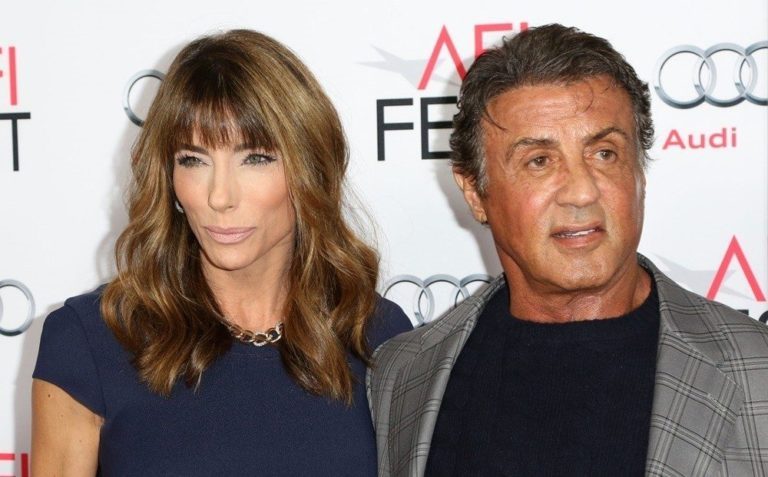 He later married Jennifer Flavin in 1997. She used to be a model and is now an entrepreneur and businesswoman. Stallone is still married to Flavin, and together they have three daughters: Sophia (born 1996), Sistine (born 1998) and Scarlet (born 2002). We get it, Sylv, you just love the letter S.

The actor has three siblings, Dante Stallone, Frank Stallone, and Toni D`Alto, who died of lung cancer in 2012.

He is a lovely character in Hollywood and has many fans. His movies and missions are quite exciting and entertaining for most people and are loved by an audience of all ages. His popular movies include First Blood, Rambo I, II, and III, Judge Dredd, The Expandables, and The-Escape-Plan. Stallone has an oil painting hobby that helps him maintain the health of his 17-inch biceps. The 5-foot 10 185 lbs actor also has a passion for boxing and has supported several events. He owns a boxing promotion company called Tiger Eye Productions and is a frequent guest at boxing events.

Without a doubt, Stallone remains an icon and a great source of inspiration in the film industry. Fans have given him various nicknames, including “The Italian Stallone” and “Rascal”. Stallone is gradually getting old for the exciting action moves, and most fans can’t help but hope that he will pass on his amazing skills to a protégé.