Celebily
Home Actresses Milana Vayntrub’s Career and Family: Does She Have A Husband or Boyfriend? 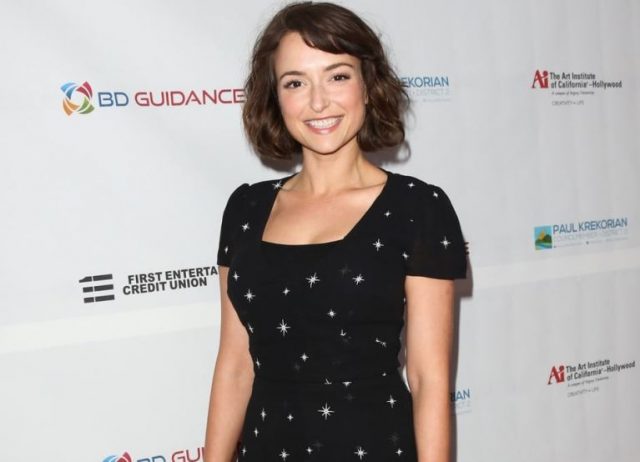 Milana Vayntrub is an American actress born in Uzbekistan, Tashkent. She has been working in the industry since the age of 5, gradually building her career and building a respected name within and outside the film industry. Although Milana has appeared in television series and comedies, music, and YouTube videos, she is most popular for the role of Lily Adams in many AT&T television commercials.

Born on March 8, 1987, the actress studied at Beverly Hills High School, but her attendance was short-lived, as she dropped out of college in the second year and received a GED. She then went to the University of California at San Diego, where she earned a Bachelor of Arts degree in Communications. Due to her interest in acting, she joined the Upright Citizens Brigade Theater and was trained in improvisational comedy/acting.

Milana Vayntrub began her professional acting career in 1995 when she appeared as Tatiana in three episodes of the medical drama series ER. She subsequently appeared as a boy Kristen in 1997 in the NBC daily soap Days of Our Lives. She then portrayed the No. 1 posse member in Lizzie McGuire and also appeared in one episode each of The Division, The League, Zach Stone Is Gonna Be Famous, Food Network Star, and Key & Peele.

The talented actress received her most notable role when she shot a series of television commercials as a saleswoman named Lily Adams for AT&T from 2013 to 2016. In 2014 she portrayed the characters, Christy and Tara, in two episodes of House of Lies and Silicon Valley. In the same year, she played the Evil Actress in an episode of Californication, and the following year she appeared as Tina Shukshin in eight episodes of Other Space. In 2016, she played Natalie in the romantic comedy of the web TV series Love, appeared as herself on the game show @midnight (2016 to 2017), and as Sloane Sandburg in eight episodes of This Is Us (2016 to 2017).

ALSO READ: Does Usain Bolt Have A Wife or Girlfriend, What Has He Been Doing Since His Retirement?

2018 came and Milana Vayntrub pulled several voice roles in Robot Chicken. She also sang the role of Doreen Green/Squirrel Girl in the Marvel Rising franchise from 2018 to 2019. In addition to television roles, Milana has also appeared in several films. For example, in 2011 she played the role of Tanya in the comedy Life Happens, and in 2016 the role of the Subway Rat woman in Ghostbusters.

Web Series and Other Entertainment Endeavors

Milana also had roles in several web series and short films, including the original series College Humor, which ran from 2011 to 2014. In collaboration with Stevie Nelson, she founded a comedy-centric YouTube channel called Live Prude Girls. The channel enjoyed great success with the web series Let’s Talk About Something More Interesting.

Vayntrub ventured into the world of music entertainment for the second time in 2011 when she portrayed the main character in the music video of the song Teenage Tide by the group Letting Up Despite Great Faults. Her first was her involvement in the 2007 music video for the song Can’t Be Saved by the band Senses Fall.

Although the AT&T actress is always in the spotlight thanks to the nature of her job, she prefers to keep her family life private. Therefore there is no information about the identity of her parents and it is known that she only has a sister named Briana.

Milana Alexandrovna Vayntrub comes from a Jewish family. She was born in Uzbekistan, Tashkent. But at that time she could not spend much time in her home country, as her family was forced to flee due to religious persecution; she made stops in Austria and Italy before finally settling in West Hollywood, California.

A few years ago, Rachel and Adam pretended to get into an argument as a joke. I thought it was real and full snot cried for about 2 hours because I guess on some subconscious level I thought of them as my parents and maybe was sad for little me who had to watch her parents argue a lot…? Anyway, that’s why they don’t do bits around me anymore, and I had to stop eating mushrooms around them. #OnMushroomsYouAreMyParents

After she arrived in the United States, life was not exactly rosy for the family. Milana Vayntrub has spoken on several occasions about how her parents worked hard for her education. Because of her family’s financial plight, little Milana began appearing in Mattel Barbie commercials at the age of five, just to earn extra money to support her parents.

Is The Actress Married or Dating Anyone?

Just as she hides details about her family from the ever-curious eyes of the media, Milana Vayntrub also keeps her love life a secret. Consequently, it is not known with whom she is currently dating, but it is suspected that she is single.

The actress was once together with a producer and songwriter named John Mayer. Their romantic relationship began in 2006, but unfortunately, it only lasted for a short time, as the couple stopped in 2007 when Mayer continued with Katy Perry.