Celebily
Home Politicians Everything You Need To Know About Barack Obama’s Relationship With The Members...

The family tree of the 44th President of the United States of America, Barack Obama, is quite extensive, especially on the side of his father, who comes from the eastern part of Africa – Kenya. Although the maternal numbers are less numerous, it is known that Obama has some strong maternal connections to six former presidents of America through his grandfather Stanley Armour Dunham.

Although he ruled one of the most powerful nations in the world for two terms, most people do not know the roots of the former American president. This paper will examine both lines from the Obamas of Luo to the Dunhams in America. Read on to learn more about the Obama dynasty.

Meet the Members Of The Obama Dynasty

On his mother’s side, Obama’s family consists of an English family tree with a few Scottish-Irish, German, Swiss and Welsh ancestors. According to a study published in 2012, the 44th president of the United States may be descended from John Punch (an African slave) through his mother’s lineage, who had several generations of African Americans who mixed with whites on their trip to Kansas.

His family on his father’s side belongs to the Luo people in Kenya, the second-largest tribe in the country. Linguistically, the Luo are recognized among the Nilotic languages, and the Obamas are from Nyanza – the western province of Kenya.

Born Stanley Ann Dunham, Obama’s mother was an anthropologist specializing in rural development and economic anthropology. She studied at the University of Hawai’i at Manoa, where she received her doctorate. She later worked at the United States Agency for International Development, Women’s World Banking, and the Ford Foundation to promote microcredit in the fight against global poverty. 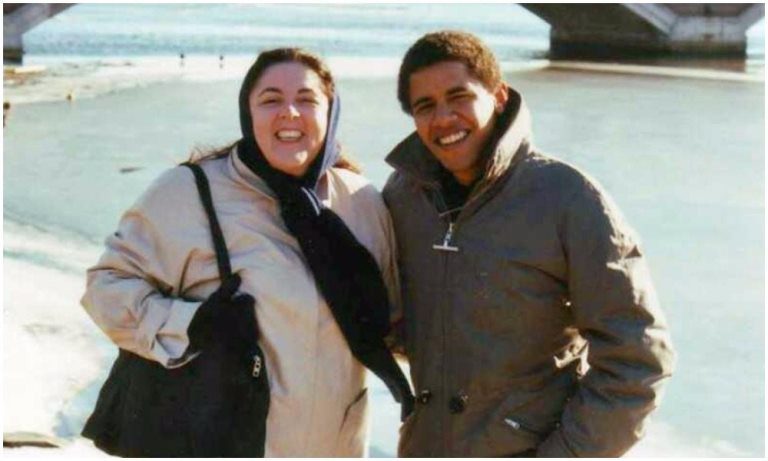 While still a student at Manoa, she met Barack Obama Sr. who was a fellow student. The wedding ceremony was held on February 2, 1961 – with Barack Obama II, who was born six months later. However, Obama Sr. left his wife a while later with their divorce in 1965, and Ann later remarried Lolo Soetoro, an Indonesian student at the University of Hawaii. They moved to his house in Jakarta, Indonesia, a year later and not long after (1970) Maya Soetoro Ng, Obama’s half-sister, joined the family.

He is the father of Barack Obama II and the descendant of Onyango Obama from his second marriage to Habiba Akumu Nyanjango. He received his university education both at Harvard and at the University of Hawai’i. Upon his return, Obama Sr. served in the Kenyan government as an economist, but later held positions in the ministries of finance and transportation. He married three times and fathered five sons and one daughter. He died in 1982 after a serious car accident – the third he suffered in the days before his death. 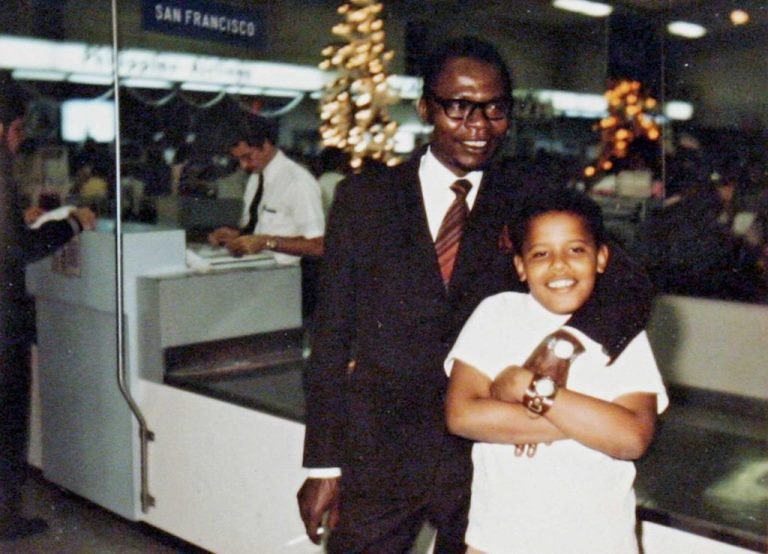 A Look At Barack Obama’s Siblings (Including Half Siblings)

It is the product of Ann Dunham’s second marriage to Lolo Soetoro, an Indonesian student in Hawai’i. Maya was born in 1970 in Indonesia after her parents moved there.

Also called Roy or Abongo, Malik Obama is a half-brother of Barack Obama. He came from the connection between Barack Obama Sr. and Kezia, his first wife. Born in March 1958, Malik spent his formative years in Nairobi, Kenya, and attended the University of Nairobi, graduating with a degree in accounting.

Just like Malik, Aluma Obama was born in 1960 in Barrack Obama Sr. and Kezia. She is a half-sister of the former US President and a graduate of the University of Heidelberg, where she studied German as a major subject. She completed further studies at the University of Bayreuth, where she received her doctorate in 1996. Auma later worked as a development aid worker in Kenya, but then moved to London.

He also bears the name Samson Obama and is another half-brother of Barack Obama. He was born in 1968 from Obama’s stepmother Kezia. Abo lives in his home country Kenya and runs a mobile phone business. Rumors say that he is not an Obama.

David Ndesandjo, also called David Opiyo Obama, came from the marriage of Barack Obama Sr. with his third wife, Ruth Baker. David Ndesandjo was born in 1967 but died in 1987 after being involved in a motorcycle accident.

He is the youngest of Obama’s half-brothers. George Hussein was born in 1982 and is the son of Jael Otieno and Barack Obama Sr – who died in a car accident six months after George’s birth. Consequently, his mother raised him in Nairobi with a French stepfather. 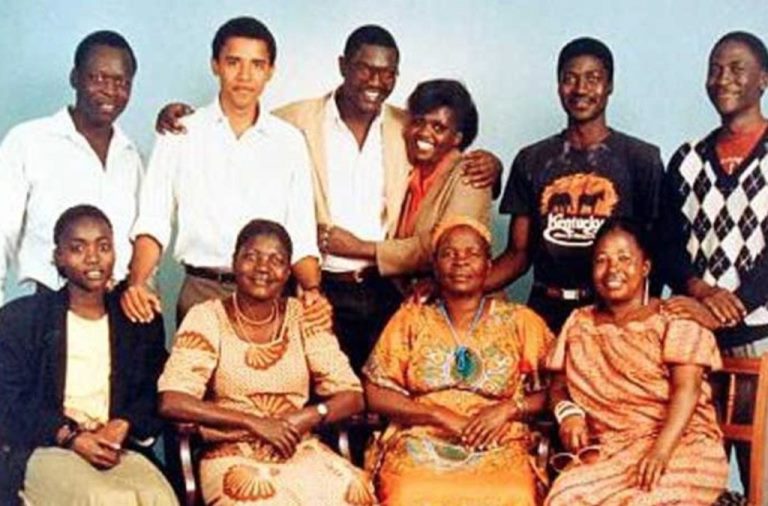 Extended Family Members – On the Maternal Side

Stanley Armour Dunham is Obama’s maternal grandfather and served as a sergeant in the United States Army during World War II. He is responsible for the education of Barack Obama, a task he took on alongside his wife Madelyn Dunham. Apart from his grandson, Stanley had blood ties with several other former U.S. Presidents Harry S. Truman, James Madison, Jimmy Carter, Lyndon B. Johnson, George W. Bush, and George H. W. Bush. He was born in 1918 and died in 1992.

She was born in 1922 and was the maternal grandmother of Barack Obama. Madelyn Dunham, whose maiden name was Lee Payne, was a banker and rose to the rank of VP of a Hawaiian bank. Obama has many memories of her since he grew up under her supervision. Madelyn Dunham died in 2008.

He was an older brother of Stanley Dunham and a great uncle of Obama. Ralph Dunham enlisted as a personnel officer in the United States Army during World War II. He was born in 1916 and died in 2012.

Eleanor Dunham, born in 1932, was Stanley’s younger sister and a great-aunt of Obama. She was born in 1932 and worked in the civil service where she achieved the rank of executive secretary before her retirement. Eleanor Dunham died in 2003.

She was the younger sister of Charles Payne and Madelyn Dunham. Margaret Arlene is one of Barrack Obama’s great aunts and taught as a professor of nutrition at the University of North Carolina and the University of Missouri. She was born in 1927 but died in 2014. 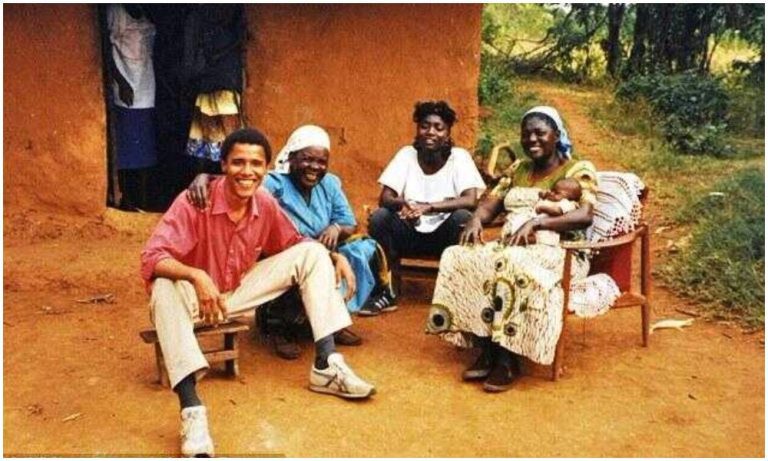 Extended Family Members – On the Paternal Side

Onyango Obama was born in 1895 and was Obama’s paternal grandfather, who later added Hussein to his name after he converted to Islam. According to the Luo tradition, children’s names reflect the circumstances of their birth, and the name Onyango is given to children born early in the morning. Onyango was a herbalist in his village and served as a missionary cook. He died in 1979.

Her date of birth is given as 1918, also called Akumu Nyanjoga and She, Habiba Akumu Obama was Onyango’s second wife and Obama’s paternal grandmother. She gave her husband three children, Barrack Obama Sr, Auma, and Sarah. Akumu died in 2006.

Sarah is Obama’s aunt and his father’s older sister. She is the daughter of Onyango and Habiba Akumu. Sarah should not be confused with one of Onyango’s wives, who is also called Sarah.

She is the younger sister of Barack Obama Senior, which makes her one of Obama’s aunts. Another daughter of Onyango and Akumu. She is the only surviving full sibling of Obama’s father.

She is the third wife of Onyango and the stepmother of Barack Obama Snr. She is also called Sarah Obama, Sarah Hussein Obama, and Sarah Orwell.

He is Obama’s half-uncle, the eldest son of Sarah Obama and Onyango. Omar was born on June 3, 1944.

ALSO READ: Barack Obama’s Height As Against That of His Predecessors, His Fitness Routine and Unhealthy Habits He Dropped 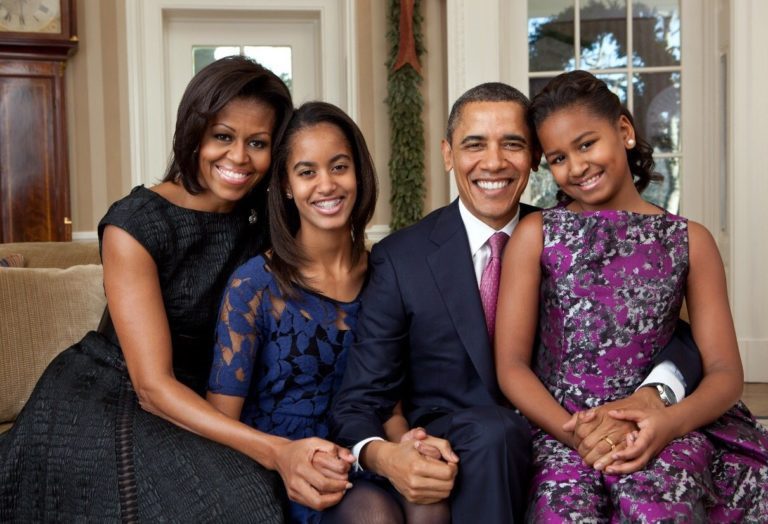 Her maiden name is Michelle LaVaughn Robinson; Barack Obama’s wife was born on January 17, 1964. Michelle Obama spent her formative years in Chicago; she graduated from Princeton University and later from Harvard Law School. She spent her early legal career at the Sidley Austin law firm, where she met Barack Obama. She actually assigned her office to Barack Obama as his advisor, but their mutual attraction led them to start dating on October 3, 1992, and thus tie the marital knot.

The US-born lawyer later served as a university administrator, at the University of Chicago as deputy dean of the Student Union and the University of Chicago Medical Center as vice president for community and foreign affairs. Michelle later became the first black First Lady of the United States when her husband was elected to the office of 44th President of the United States, a position she held from 2009 until the end of his second term in 2017.

Who Are The Barack Obama Kids?

Barack Obama and his wife have two daughters – Malia Ann Obama, born July 4, 1998, and her younger sister, Natasha, a.k.a. Sasha, born on June 10, 2001. Sasha made the records as the youngest child ever to live in the White House since 1961 when John F. Kennedy Jr. was brought to the White House as an infant. Time Magazine ranked the two Obama girls among the “25 most influential teenagers of 2014”. 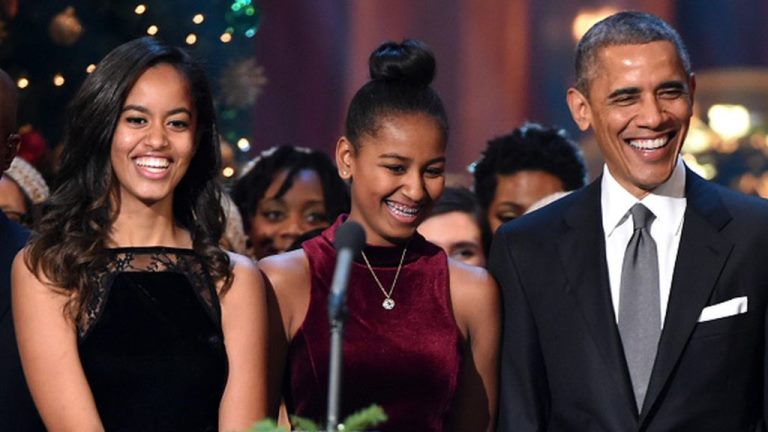 Her life in Chicago was quite busy, with Malia taking dance, soccer and drama classes, while Sasha was busy with tap and gymnastics classes, although both girls shared a common interest in tennis and piano. Both girls were educated in Washington DC and attended Sidwell Friends School. Malia’s high school days were quite eventful as part of her 2014/2015 summer vacation was spent in LA and New York, where she worked in television studios. She did not let her summer 2016 pass by unused, as she spent it at the American Embassy in Madrid, Spain, where she worked as an intern. Barack Obama’s first daughter graduated in 2016, and before her family moved to Washington DC, she joined the private Laboratory School at the University of Chicago with her sister Sasha.