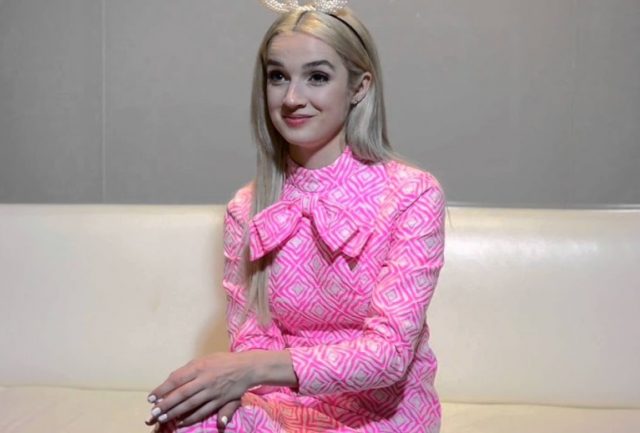 To stand out in a crowd, you have to be different. No wonder YouTube personality and pop singer That Poppy is becoming increasingly popular because of the strange characters she portrays in her videos, and she was rated as one of the most creative personalities on YouTube.

The beautiful but strange young lady is a singer, actress, dancer, and YouTube personality born with the birth name Moriah Rose Pereira, but popularly known by her nickname That Poppy. Her father was a drummer in a rock band, and as a child, she spent most of her time watching his group rehearse and perform at events. Her family moved to Nashville, Tennessee when she was 14 years old because her father changed jobs, and he also wanted his family to make a fresh start in a new environment. Less than a year after moving to Nashville, Poppy moved to Los Angeles to continue her music career.

The pop singer’s musical style was influenced by music genres such as J-Pop, K-Pop, and Reggae. She started writing songs in 2012 and is a fan of Cyndi Lauper, The Unicorns, Elvis Presley, Jimmy Eat World, No Doubt, and Blondie. The pop singer came to social media in 2011 and in 2012 she started singing covers for songs like “Little Talks” by Of Monsters and Men and “Kids” by MGMT, which she did with the music band Heyhihello. She also produced covers for a song in Eppic’s title Hide and Seek. She worked with Steamy In the City Creator Studio to produce music videos for covers of Alt-J’s “Breezeblocks” and Mazzy Star’s “Fade into You”. Because of her stylish pictures, where she always shows a doll image, she was offered a contract to become the face of the famous collection of the designer “Hello Sanrio”.

In Los Angeles, Poppy began working with a high-profile YouTube personality, writer, and director Titanic Sinclair, who helped her improve her YouTube presence by creating vlogs of herself on YouTube that were strange but made viewers aware of her videos. The singer and rising YouTube sensation signed a record deal with Island Records in 2015 and released her first song Everybody Wants To Be Poppy, followed by Low Life, and in February 2016 she released Bubblebath. As part of her strange nature, the singer and YouTuber released a controversial book in 2017 entitled The Gospel of Poppy, which contains strange ideas about the Bible and written versions of her YouTube videos. Afterward, she received criticism and the accusation of being a sect leader, but she denied such accusations in her vlogs.

The singer and YouTuber run her channel, “That Poppy TV”, on which she uses sarcastic and strange vocalizations to broadcast criticism about the culture of social media. For this reason, she has been described as a robot and a strange personality, which is believed to have been created by musician and director Titanic Sinclair. Her short film, I’m Poppy, also directed by Titanic Sinclair, features Poppy, who portrays a character who talks about issues in the world such as fame, cults, Satan, out-of-control fans, and Poppy’s rival Charlotte, was shown at the Sundance Film Festival on 23 January 2018.

The beautiful pop singer is currently 23 years old, as she was born on January 1, 1995, in Nashville, Tennessee. She has a slim figure and a size of about 5ft 3inches.

Not much is said about Poppy’s mother, her father, or her siblings, except that her father’s name is Mike and he was a drummer in a music band.

Quick Facts About That Poppy

A lot of controversies surround Poppy’s new identity ever since she met director Titanic Sinclair but some quick facts to note include the following:

The pop star considers her personality to be that of a Kawaii Barbie Child.

White is her favorite color as evident in her videos.

Her hair has not always been white, she was the one that transformed her look in 2014.

She refers to herself in the third person whenever being interviewed never directly.

She plays the piano and guitar very well.

She made a guest appearance in the Disney series Jessie.

She won the Streamy Awards as a Breakthrough Artist in 2017.

Her videos won the Iconic Moment of the year award in 2017 by Unicon Awards.