Monica Bellucci is an Italian model and actress who has a very long professional resume. She started as a model and after becoming very successful there, she decided to switch to acting, which went very well. As there is a lot that speaks for her in her professional life, she also has a lot in her private life that many people have not got to know.

The actress was born Monica Anna Maria Bellucci on September 30, 1964, in Città di Castello, Italy. She was raised in San Giustino by her parents, Brunella Briganti and Pasquale Bellucci, as their only child. While her father had and ran his trucking business, her mother was a housewife.

Although her beauty was one of the things that would later drive her success, her father insisted that she was not beautiful as a little girl, but as soon as she was 12 years old, everything changed. When the mother looked at her daughter’s success, she realized that Monica’s siblings would have been jealous of her if she had any.

For her education, she went to the University of Perugia to study law, but her passion was modeling, which she started shortly after her youth. At that time (1977) she was modeling for a local photographer. She hardly knew that she was beginning a future that would take her to a place that many could only imagine.

She is considered one of the most beautiful women in the world and signed with Elite Model Management in Milan at the age of 24, which enabled her to start modeling. Just one year later she had already begun to make a name for herself as a model in various parts of the world, including such important places as Paris and New York City.

In 1990, she decided to try acting, but this did not mean that she gave up modeling. In fact, she has become the face of the products of Dior as well as Dolce & Gabbana and many others.

The acting career of Monica Bellucci, described as the Italian sex symbol, began with an appearance in the Italian film Vita coi figli in 1990, followed by The Raffle just one year later and then in 1992 Bram Stoker’s Dracula and Ostinato Destino. She received her most popular role in 2003 when she appeared as Persephone in The Matrix Reloaded and The Matrix Revolutions.

Other films in which she has appeared include Malèna (2000), The Passion of the Christ (2004), and the James Bond film Spectre in 2015, which is one of her most significant film appearances, as she played the role of a Bond girl in the film even though she was 51 years old at the time, making her the oldest woman to ever play the role.

Thanks to her numerous films, Bellucci has received many nominations and received a number of awards, including two awards from the Italian National Syndicate of Film Journalists for Ricordati di me and On the Milky Way, and the Globo d’oro, considered the Italian Golden Globe.

With her long career, Monica Bellucci has been able to accumulate a huge fortune for herself. She has a fortune estimated at $45 million, which she has earned from her acting and modeling career, among other things. 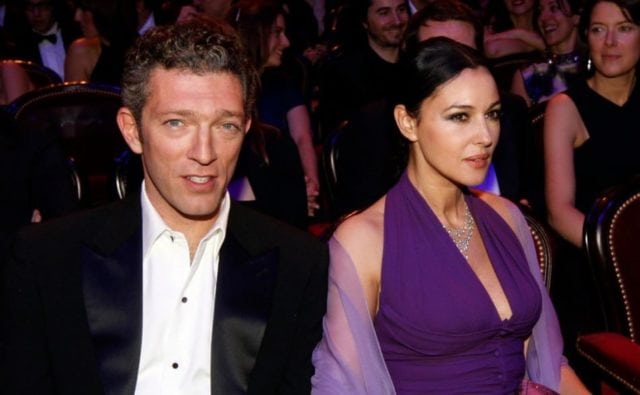 Monica Bellucci has married twice so far. The first man who became her husband was the fashion photographer Claudio Carlos Basso. The two married in 1990, but unfortunately, the marriage only survived until 2004, when they settled for a divorce.

The next time the beautiful actress married the French actor Vincent Cassel in 1999. The couple met in 1996 during the shooting of “Appartement” and soon they became a couple. Three years later, they decided to form the bond of marriage at a ceremony in Monaco.

After 14 years as husband and wife, Cassel and Bellucci, who had lived both in Rome and Paris, decided to end their marriage amicably.