American actress Madelaine Petsch made her professional acting debut in 2015, and almost two years later she achieved fame and glory with the lead role of Cheryl Blossom in the CW television series Riverdale, which premiered on January 26, 2017. The role earned her the Teen Choice Award 2017 for Choice Hissy Fit. Read on as we reveal more facts about the starlet.

She was born on 18 August 1994 in Port Orchard, Washington, to South African parents. She has a brother named Shaun. Madelaine was born with a passion for entertainment. She started taking dance lessons at the age of 3 and at 5 she took acting lessons in addition.

Mad attended South Kitsap High School, a public school in Port Orchard, Washington. For the first ten years of her life, she commuted between South Africa and Washington. But shortly after graduating from high school, she moved to Los Angeles to pursue her career in show business. She also stopped dancing at competitions at the age of 16.

In LA, Petsch started to work with commercials, which appeared in a national commercial for Coca-Cola in 2014. Mad’s first film appearance was in Hive in 2015, where she played the role of Current Girl #2. Also in 2015, she got a small role, the mermaid on the TV show Instant Mom. 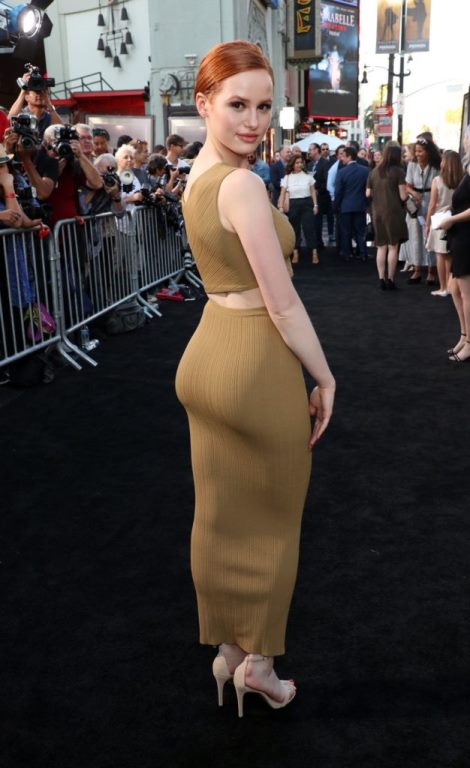 Petsch met the casting directors of Riverdale in 2015 while they were working on Legends of Tomorrow. She auditioned for a role in the DC Comics series, but she never got it. Then she was invited to audition for the part of Betty for Riverdale. However, four months after the audition, she was asked to audition for the role of Cheryl, which she now plays in the series.

Mad was raised vegetarian and at the age of 14, she became a vegan. As a result, she actively participated in an awareness campaign for PETA.

When Mad moved to LA in 2012, she worked a number of jobs to support herself, including waitress, barista, hostess, and personal assistant to a photographer. She also worked in a hookah lounge and in a political consulting firm.

Petsch is a natural redhead. Unfortunately, she was often mocked for it as a child. “…and I am naturally redheaded. It’s funny because I was mocked for it as a child. I grew up in a small town, I was the only redhead besides my brother,” she said to Cosmo. She added: “…I was just the strangest kid in this small town, so I got made fun of for that. My brother was thrown stones at me! Now I take it very seriously and want people to know that I am a natural redhead and I am proud of it.

Mad is such a natural beauty, in addition to her hair, her lips, eyelashes, and ass are all real. When Cosmo asked her if she had any questions about whether her lips were real, she said, “Yes, all the time. If my hair is real, if my eyelashes are real, my ass is real. It is constant. It’s all real. All-natural, baby!”

Petsch and her brother grew up without religion.

Madelaine is very interactive with her fans. She visited her Youtube channel to answer a series of questions from the fans.

Although she loved her friend’s tattoos, she revealed that she would most likely never get one for herself. “I will never get them (the tattoos). I am so undecided and I am very… everything must be clean and neat and organized. I feel like I would choose something and I would hate it the next day. I think it would be the biggest regret of mine – to get a tattoo”.

Mad is a big Harry Potter fan. Her other favorite films include American Beauty, American Psycho, and Fight Club.

Crazy is not one who hides his romantic life. She goes out openly and proudly with California-born rapper, hip-hop/R&B artist Travis Mills aka T Mills. Their relationship began in the summer of 2017, and the couple often raves about each other in their respective social media accounts, and many have even described her as one of the sweetest couples.

In October 2017 Madelaine told Cosmopolitan how she met T. Mills. According to the starlet, Mills slipped into her DM on Facebook. Mills had auditioned for the role of Jughead in Riverdale, but she didn’t get it. So he added her on Facebook (they had a mutual friend) to congratulate her on getting the role in Riverdale and then they started communicating.

However, at that time Mad was shooting the first season of Riverdale in Vancouver, but when the shooting was over and she was back in LA, she met with Mills and the rest is, as they say, history.

“In January of season one, he wrote me a message on Facebook congratulating me on the show. He had auditioned for Jughead. I think we just happened to have mutual friends, so we added each other,” the redhead told Cosmo.

“We very rarely kept in touch from January to February, not even that much, and the day I came back from the first season in February, I was bored in LA, believe it or not. I asked myself, “What am I going to do? I got my hair cut, and he texted me, ‘Let’s go to the movies! We hung out and spent every single day I’ve been in L.A. since February”.

But that was not the only thing Petsch told Cosmo about her boyfriend. She also revealed her favorite tattoo of him, namely his beard Simpson on his leg.

“He has a spider behind his ear that I always track with my finger. He has a Medusa on his neck, which is really cool. But my favorite is his Bart Simpson on his leg.”

She added, “If you gave me a piece of paper, I could probably reproduce every single tattoo he has. Pretty impressive, huh?” Oh, young love. This couple is obviously having a wonderful time.