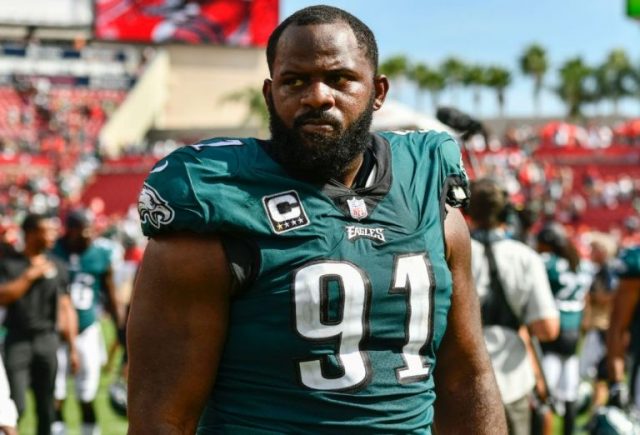 Fletcher Cox is a defensive tackle player who has played for the Philadelphia Eagles since 2012. Before the Super Bowl 2018 on Sunday, February 4, his name was a recurring point in many discussions about the biggest sporting event in the USA.

For a man who has never seen the Super Bowl in his life, the 2018 Super Bowl will be the first on so many levels for Fletcher Cox.

A convincing win against the Minnesota Vikings earned Fletcher Cox’s Eagles a place in the 2018 Super Bowl in Minneapolis. The Eagles have the pressure to go into the game as underdogs, while the Patriots have been selected as favorites for Sunday’s Super Bowl LII match.

Cox would also put his name in the history books of his hometown of Yazoo City, as the last person to appear in a small-town Super Bowl was Willie Brown with the Raiders in 1976, long before Cox was born.

The depth of the Eagles’ defensive line has always helped them defeat other teams, and with Cox currently one of the most deserving defenders in NFL history, many eyes would be on him to justify his payment.

During his first four seasons with the Philadelphia Eagles, Cox earned $10.2 million. The Eagles made it clear they wanted him long-term.

After that, Fletcher Cox made headlines in June 2016 after signing a six-year contract extension of $103 million with a $26 million signing bonus and $63 million guaranteed money against injuries – the most guaranteed money for a non-quarterback.

The fact that Fletcher Cox is a top player and is still in his prime is an indicator that he is worth this contract, which made him the second-highest-paid defensive tackle behind Miami Dolphins’ Ndamukong Suh.

Cox ended 2017 with an estimated net worth of $33.4 million, consisting mainly of his salary and profits. A small fraction of that amount came from his sponsorship contracts.

Fletcher Cox is possibly single because there is no record of marital relations about him. Also, the wedding bells do not seem to ring since Cox is currently engaged to no one.

Fletcher Cox is currently involved in a ridiculous relationship scandal. He is facing a $50,000 lawsuit for “alienation of affection” by a man named Joshua Jefferds. Put simply, the North Carolina resident accuses Cox of “seducing” and sleeping with his wife Catherine Cuesta Jefferds while she was on a work trip in Pennsylvania. Cox is also accused of pursuing a relationship with Jefferd’s wife via text messages.

The North Carolina resident has bawdy text messages with nude pictures as evidence that Fletcher Cox seduced his wife. Contributing to Jefferd’s anger is the fact that his wife blocked him at Instagram and moved to Mullica Hill in New Jersey, which is much closer to Cox’s Philadelphia venue.

As stated in court documents, Cox has filed for the case to be dismissed, claiming that his relationship with Cuesta Jefferds was based on mutual attraction and that she willingly agreed to the relationship. Coz also claimed that he did not know the woman was even married.

Even if Cox and Cuesta Jefferds are still together, they will probably keep their heads down until the case is closed.

Cox was raised by his mother, Malissa Cox, along with his three siblings, while the family lived in a three-bedroom trailer. His mother was a single parent. Cox’s older brother, Shadrick, took on the role of a positive male figure in his life and drove him to become a great football player. Unfortunately, Shadrick died in 2015 at the age of 34 after a fatal heart attack.

When Cox’s mother grew up, Malissa was skeptical about letting him play football. But at the age of 13, after years of pleading and appeals from a coach in her small town of Yazoo City, Cox’s mother finally gave Malissa her permission. I am sure she will be proud of this decision when she sees Cox at the 2018 Super Bowl.

Fletcher Cox doesn’t watch football that much. It’s so bad that he has never watched a Super Bowl! Let him do the playing, we will do the watching.

In 2009, Cox played in all 12 games during his true freshman season at the Mississippi State University.

The Eagles traded up three spots in the 2012 NFL Draft to take Fletcher Cox with the 12th-overall selection.

The defensive lineman had 22 sacks in his first NFL season.

Cox loves fixing up old cars and claims that he could have been a mechanic if he wasn’t playing football.

Fletcher Cox owns a drag racing team that competes in professional events around the country.