Celebily
Home Celebrities Who Is Maria Taylor Husband? She Married For The Second Time

Maria Taylor, born Suzette Maria Taylor, is a popular American TV presenter working for ESPN and the SEC Network. She has been a sports presenter for over a decade and few sports followers do not know her.

This 34-year-old TV presenter has earned hundreds of thousands of followers through her work on the ESPN network. Her fans are well-informed about her professional career, which she also shares on her social networks. However, her details, which include the details of her marriage and relationship, are the things her fans want to know.

So who is Maria Taylor’s husband? When did she get married? In this article, we have compiled all the details about her relationship and marriage. To find out everything, read this article.

ALSO READ: Who Is Arnetta Yardbourgh? Everything About Shaquille O’Neal’s Ex-Girlfriend

Maria, who hid her personal life from her fans for years, gave a pleasant surprise to her fans in February 2021. At the time, she shared a couple of snapshots of her marriage to a completely mysterious man on Instagram. Taylor shared the post on 21 February with the caption “I love our love story”.

The photos from their intimate wedding ceremony showed Maria in a white dress, while her husband was wearing a black suit. Meanwhile, newlywed sports presenter Maria did not reveal her husband’s name.

A couple of weeks after Maria announced her wedding, an Instagram page called @flowersbyyona shared a photo from her wedding. The picture showed them laughing happily as they walked down the aisle. In the caption, the page revealed Mary’s husband’s name “Jon” while congratulating the newlyweds. Check it out.

For your information, Mary is a tall woman, standing at 6 feet 2 inches. Mary Taylor’s husband, Jon, is even taller. From their appearance, John looks like he is about two centimeters taller than his wife, so we can assume that his height is 6 ft 4 in. However, this is not verified information.

Maria Taylor First Marriage: Who Was Her First Husband?

Taylor, who is known for keeping her personal life a secret, made headlines when she revealed her marriage in 2019. As we know, Mary was married to Rodney Blackstock.

According to some sources, the couple got married on 5 May 2019 at the Oceanfront Hilton Sandestin in Destin, Florida. They dated for several years before finally tying the knot.

How Did They Meet For The First Time?

To tell the story of the early days of their romance, we must start with their first meeting. According to an article published by The Knot News, Maria met her then-husband in September 2014. At the time, the ESPN anchor and Blackstock happened to attend a Charlotte Hornets game in North Carolina. Maria remembered their first meeting,

“I remember seeing her and saying to my girlfriend: ‘If we keep going to these games, I’ll finally meet him.'” 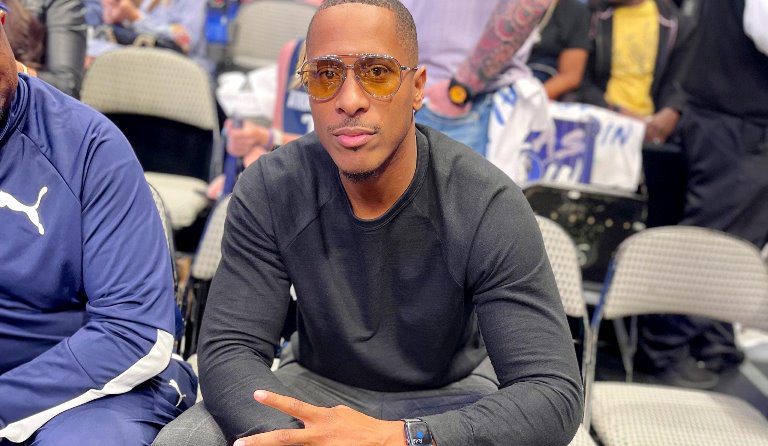 “Or, he thought maybe I was there to support one of the guys-I was a girlfriend of a player or something.”

The first time they met, they exchanged numbers. They met again in the car park and the ex-couple thought about getting some food, but they “ended up talking in the car park until five in the morning”.

Their Engagement And Initial Plan For Marriage

Speaking to The Knot, Mary said that Rodney had thought of proposing marriage to her in Palm Springs, where they planned to go on holiday, but he couldn’t bear it.

The couple had also planned to tie the knot in June 2016 but later called it off as they realized they were not ready to get engaged. After they called off the wedding the first time, they had been on a break for some time. Although they were not officially together, they always kept in touch.

And after three years, they finally met again and this time even stronger. They both called their parents and announced that they were planning to get married soon.

Shortly after their reunion, Rodney proposed marriage to his then-girlfriend Mary for the second time during their hiking trip in Los Angeles. Recalling the moment Rodney got down on one knee, Mary said,

“He had all this stuff packed up. Then he starts getting into this long soliloquy speech about why he loves me and why he’s so happy that we’re going to be together forever.”

“He pulls out the ring again, and it was the same happiness I had when I first saw the ring. It all came flooding back.”

Blackthorne proposed to Mary with a flower-inspired aura ring. Taylor said she fell in love with the ring the moment she saw it. “I knew I wanted rose gold and something that shines from every angle,” Taylor gushed about her ring preferences.

After almost five years of an affair, Maria Taylor and Rodney Blackstock finally got married on 5 May 2019. The couple said “I do” in front of family and closest friends at their beach wedding, which was done in all-white.

ALSO READ: Who Is Miles Roosevelt Bialik Stone? Inside The Life Of Mayim Bialik’s Son

How did Maria Taylor And Rodney Blackstock Separated? Are They Divorced?

Well, as we mentioned before, Maria Taylor prefers to keep her details out of the public eye. Ergo, there is little or no information about how her marriage to Rodney Blackstock broke up. There is no doubt that she and her ex-husband are divorced, as the ESPN journalist is married to a young man.

Moreover, Maria has not given any update on how her marriage to Blackstock broke up. All we know is that she was once happily married to this man, but now she is no longer with him.

Rodney was born in Georgia and currently lives in Atlanta, Georgia. He currently works as an insurance consultant for State Farm in Atlanta. In addition, he runs the Blackstock Insurance Agency for AAA Georgia, as stated on his Facebook profile.

As for his academic studies, Rodney Blackstock studied at Greensboro College.