Kofi Annan was one of the most respected diplomats in the world, serving as Secretary-General of the United Nations for almost a decade (from 1997 to 2006). One of the most important characteristics of his two terms in office is his resolute opposition to the United States’ invasion of Iraq and his efforts to achieve world peace. While his life was mainly viewed through the lens of diplomacy, there are many other sides to his history, his life, and his simple death.

Who Is Kofi Annan?

The former UN Secretary-General was born on April 8, 1938, as Kofi Atta Annan in the Ashanti region on the Gold Coast (today’s Ghana) at the side of his twin sister Efua Atta, who died in 1991.

His Education and Career

For his education, the man who would later receive the Nobel Peace Prize attended Methodist boarding school, and from there he moved to the Kumasi College of Science and Technology, now the Kwame Nkrumah University of Science and Technology of Ghana. Nevertheless, it was Macalester College in Saint Paul, Minnesota, in the United States, where he received his Bachelor’s degree thanks to a scholarship from the Ford Foundation. He then attended the Institut Universitaire des Hautes Etudes Internationales in Geneva, Switzerland, and later the MIT Sloan School of Management from 1971 to 1972.

He began his professional life in 1962 when he obtained a position as Budget Officer at the World Health Organization in Geneva. This was the first step in his gradual rise at the United Nations, which he left between 1974 and 1976 to work in his native Ghana.

Kofi Annan held this office until 2001 when he was reappointed for a second term in the same capacity. In the same year, Annan and the UN were jointly appointed as Nobel Peace Prize winners “for their commitment to a better organized and more peaceful world”.

His term in office was not one of the best times for world peace, because it was the time when the US invaded Iraq, which he described in retrospect as illegality.

With many achievements during his time at the United Nations, including the launch of the Global Compact campaign to promote corporate social responsibility and opposition to Iran’s nuclear program, Kofi Annan became one of the most popular UN Secretaries-General ever.

During his term of office, however, there were also some controversies, such as the case of sexual harassment involving the then UN High Commissioner for Refugees, Ruud Lubbers, and the Director of UNHCR staff, Werner Blatter. Although Lubbers was found guilty by the Office of Internal Oversight Services (OIOS), Kofi Annan acquitted him of all wrongdoing, but the OIOS stated in its annual report to the General Assembly that it found Lubbers guilty and that this impaired the favorable influence Annan had.

Another major controversy in which he became involved in the so-called oil-for-food scandal. The scandal involved his son, Kojo Annan, who allegedly received payments from Cotecna Inspection SA, a company that had signed a contract with the UN’s Oil for Food program. To investigate the case, Annan set up an independent committee of inquiry which found him not guilty, but the Secretary-General was criticized for his complacency in handling the matter. 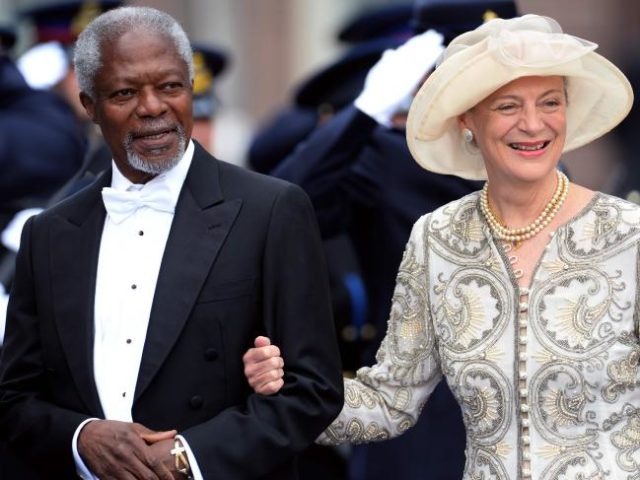 The first woman he married was Titi Alakija, who was Nigerian. The two became man and wife in 1965, but unfortunately, the marriage ended in divorce in 1983. Before it ended, the marriage was blessed with a son, Kojo Annan, born on July 25, 1973, and a daughter.

With his wife and three children, Annan led a fairly simple family life, largely removed from the public eye, with the exception of Kojo, who came into the public eye as a result of the oil-for-food scandal.

Kofi Annan lived a life that can be described as very successful and died on August 18, 2018, after a short illness. According to his foundation, he spent his last days with his wife and the three children around him. Since his retirement, the former UN Secretary-General lived in Switzerland, where he died.