The highly talented Welsh-born actress Catherine Zeta-Jones established herself as a Hollywood leading actress with roles in blockbuster films such as The Mask of Zorro (1998), Entrapment (1999), and Traffic (2000). The Hollywood screen diva played an Academy and BAFTA Award-winning role in the highly acclaimed musical film Chicago 2000, followed by roles in Ocean’s Twelve (2004) and also in the Broadway production of A Little Night Music 2009, for which she won a Tony Award.

In addition to her brilliant career as a screen and stage actress, Zeta-Jones is also one half of a Hollywood power couple, the other half being double Oscar-winning actor and producer Michael Douglas.

Catherine Zeta-Jones was born on 25 September 1969 in Swansea, Wales, United Kingdom. She is of Welsh and Irish Catholic descent on her father’s and mother’s side respectively. Her mother Patricia (née Fair) worked as a tailor and her father David Jones was a factory owner. Catherine’s name was derived from those of her grandmother’s Zeta-Jones and Catherine Fair.

She grew up in the Welsh seaside town of Mumbles with two siblings – an older brother David and a younger brother Lyndon – who were originally middle class. Their fate changed when they won a whopping £100,000 in a bingo competition. 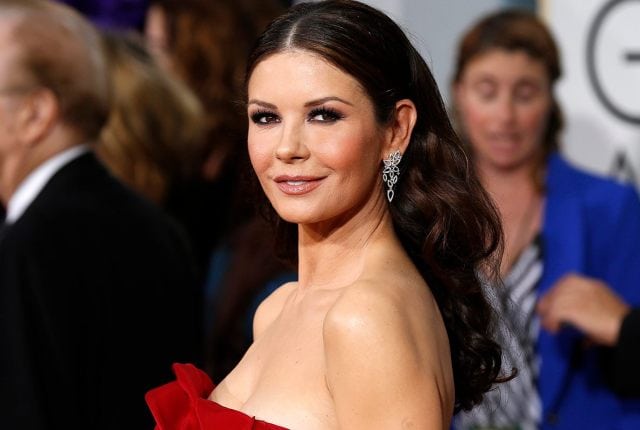 Since Zeta-Jones was a rather hyperactive child growing up, her mother enrolled her in the Hazel Johnson School of Dance at the age of 4 and also trained her at Dumbarton House School. From an early age, Zeta-Jones showed signs that she was destined to become a star through first-rate performances in school plays. The young woman came into the limelight in her hometown when she won a Junior Star Trail talent contest, performing a song by the famous Welsh singer Shirley Bassey. As a young teenager, Zeta-Jones gained much more media attention when she won a national tap dance competition.

In 1981 she played the title character in a stage production of the musical Annie at the Swansea Grand Theatre. The talented actress was also the leading actress in a production of the musical comedy Bugsy Malone, which was performed at the West End Theatre in 1983. Zeta-Jones was a rather brave teenager who had not yet finished her A-levels when she left school at the age of 15 and moved to London to pursue a full-time career as an actress. While her career as a stage actress flourished, Zeta-Jones enrolled in a three-year course in musical theater at the Arts Educational School in Chiswick, London.

After proving herself on stage, Catherine Zeta-Jones made her screen debut in 1990 in the French-Italian fantasy film 1001 Nights, which received little attention. The talented actress had more luck on the small screen when she appeared in the British comedy-drama series The Darling Buds of May from 1991 to 1993. The series had the highest television ratings in the country at the time, raising the actress to a higher level of recognition. Unfortunately, the actress was soon typecast as a sex symbol with the acting roles she was offered, and since she was uncomfortable with the situation, she moved from London to Los Angeles in the hope of a “new beginning”. This move would probably be considered one of the best decisions Zeta-Jones ever made, as it changed the course of her career for the better.

Catherine Zeta-Jones made her Hollywood debut in the superhero movie The Phantom in 1996, followed by a role as Isabelle Paradine in the TV mini-series Titanic (1996). Her role in the latter brought her the attention of legendary Hollywood filmmaker Steven Spielberg, who in turn suggested her to Martin Campbell, the director of The Mask of Zorro (1998). Consequently, Zeta-Jones’ highly acclaimed portrayal of Elena Montero, the female lead in the box-office hit “The Mask of Zorro”, was all she needed to achieve Hollywood star fame, and as they say, the rest is history.

From one blockbuster to the next, the talented actress has proven to be a box-office blockbuster in her illustrious, long acting career. Along with an Oscar, a BAFTA, 3 SAG Awards, and a Tony Award, Catherine Zeta-Jones was named Commander of the Order of the British Empire (CBE) in June 2010.

Over the years, Catherine Zeta-Jones has proven to be one of Hollywood’s most bankable leading actresses. The highly talented actress has had her fair share of blockbuster movies and also enjoyed some of the most lucrative sponsorship deals in Hollywood history.

Zeta-Jones was named the highest-earning celebrity sponsor of 2002 thanks to her multi-million dollar deals with Elizabeth Arden Inc. and T-Mobile. She has also turned her attention to entrepreneurship with the launch of her own collection of home décor products in 2017. All these and several other ventures bring the net worth of the Oscar-winning Hollywood star to an estimated $45 million.

Catherine Zeta-Jones is married to actor, producer, and co-actor Michael Douglas. Despite the age difference of 25 years, this Hollywood power couple remains a good example. The duo met in August 1998 through a mutual friend at the Deauville Film Festival in France. Their love story progressed quite quickly when they got engaged in December 1999 and finally entered into a marriage on November 18, 2000.

The wedding ceremony took place at Manhattan’s Plaza Hotel with an estimated budget of 1.5 million pounds. It was declared the “Wedding of the Year” by the BBC.

The Catherine-Douglas children, who are descended from two Hollywood A-listers, are indeed bonafide Hollywood kings. However, they have been shielded as much as possible from the media. They grew up in the British Isles of Bermuda until 2009 when the family moved to New York.