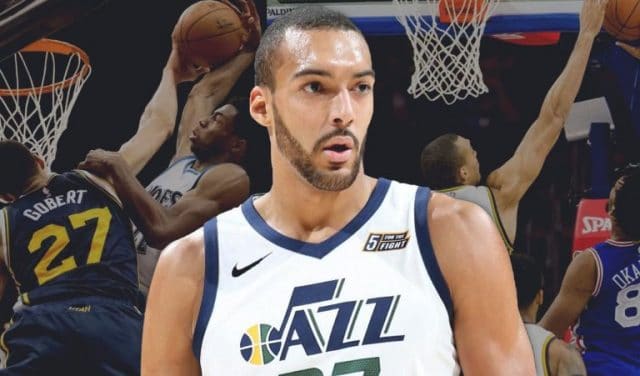 While some believe that exceptional athletes are not born made, it is a known fact that talent without hard work does not matter much. Rudy Gobert is an exceptional athlete who has excelled for most of his life; not only because of his outstanding height but also because of his outstanding talent on the basketball court. Even at a young age he showed many prospects of becoming the celebrated player he is today. Although a little unpolished, he is known for his diligence, toughness, tenacity and great talent with a passion for competition.

All his hard work culminated in the outstanding career he enjoys today in the NBA. He has won the NBA Defensive Player of the Year awards in both 2018 and 2019. This achievement makes him one of the 10 players who have won this award at least twice in NBA history. He also plays for the French national basketball team and was named French Player of the Year 2019. As Rudy continues to break records and set a new precedent, the French-born player is definitely at the peak of his career.

Rudy Gobert was born on 26 June 1992 in Saint-Quentin, France, and discovered his love of basketball at an early age. His love of the game may have been inspired by his father, who was once a professional basketball player. While growing up in his hometown, he started playing for the club JSC St-Quentin in 2003. He later joined the club Saint-Quentin BB.

In 2007 he became a member of the training center for the cadet categories of the Cholet Basket. As his hard work and dedication did not go unnoticed, he was accepted into the French U-18 national team in 2010. With this team, he participated in the FIBA European Championship for under-18s. During the championship, he was voted best rebounder and best scorer of the team. From 2009 to 2013 he played for both the Cholet Basket Junior and the senior national team.

With an outstanding amateur career, Rudy Gobert declared for the 2013 NBA Draft and was selected by the Denver Nuggets on June 27, 2013, as the 27th overall pick. On the draft night, he was traded to Utah Jazz where he played in the 2013 NBA Summer League.

With his 7 foot 1 inch height and 7 foot 9-inch wingspan, he quickly earned the nickname “Stifle Tower”. As his game progressed, he continued to improve his game and also finished third in the NBA’s Best Player of the 2014-2015 season award.

By 2016, after his original contract expired, he signed a 4-year contract extension for $102 million, making him the highest-paid French athlete at the time. In the same year, he had a career-high of 22 points in the 112-105 win over the Phoenix Suns. His other career highlight came in 2017 with 27 points and 25 rebounds in the 112-107 win over the Dallas Mavericks.

His Parents Influenced His Career From Different Angles

Rudy has admitted that he did not experience much racism in his childhood, although he was born the son of a white mother and a black father. His mother Corinne Gobert raised him in Saint Quentin. He has described his humble beginnings quite vociferously and admits that he does not have much, but a place to sleep and a mother who was willing to do anything for him in his early years.

His father, Rudy Bourgarel, was a professional French basketball player from 1988 to 1994. Apart from the nationality of his parents, Rudy chose not to speak deeply about his childhood. He has always hinted that he was raised by his mother, which means that his parents were not together when he grew up. By all indications, his father seems to be a part of his life, since he shared what his father told him when he started playing basketball.

His father advised him not to play basketball because of him and should always remember to have fun while playing. He also admitted how proud his father was that he played in the NBA, a dream he had but never realized. Sports analysts continue to point out the similarities between Rudy and his father, as both have excellent physical characteristics with good size, strength, good length and the ability to run the ground.

Does Rudy Gobert Have a Girlfriend?

Rudy has done everything he could to concentrate on his professional career, which has paid off. Currently, there is no information about who he is currently dating or if there is anyone in the picture at all. The amazing basketball prodigy was not photographed with any woman other than his family, which makes it difficult to determine if he is in a relationship. Right now, the basketball star is concentrating on reaching the peak of his career.