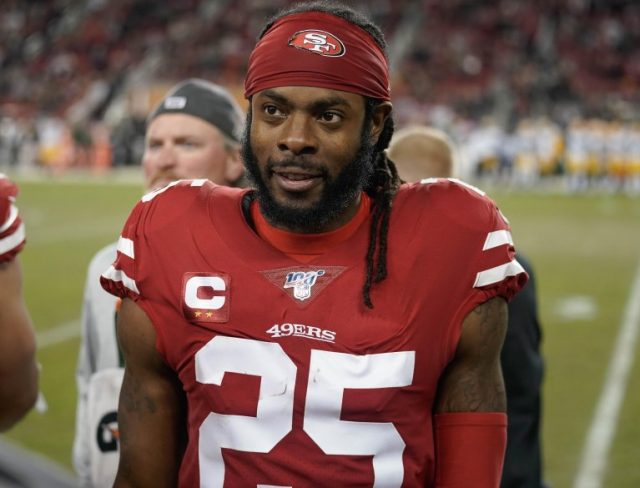 After playing both as a wide receiver and later as a cornerback, Richard Sherman has been named Pro Bowl four times and was voted All-Pro just as often. His dedication and commitment helped the Seahawks win their first-ever Super Bowl title in 2013.

Sherman was born on March 30, 1988, in Compton, California, where he grew up as Richard Kevin Sherman. At his high school, Dominguez High School, he showed signs of the talent that promised success in an athletic career, whichever path he would take. He also played and participated in athletic events involving football. For his efforts in athletics, he was named All-American by USA Today for winning the state title in the triple jump with a jump of 15.44 meters.

In his senior year, he helped his school’s soccer team win a CIF South Section title in the third division. He graduated in 2006 as a salutatorian in his class with a GPA of 4.2 after being voted “the male student with the highest probability of success”.

Next, Sherman received a sports scholarship to study communication science at Stanford University. Here he played as a wide receiver for the school’s football team. In his first year, he was named “Freshman All-American” with 34 receptions, 581 receiving yards, and 3 touchdowns. However, he suffered a serious knee injury that ended his season in early 2008. This earned him a year in the red shirt, during which he returned to Stanford to complete his postgraduate studies. After the injury, Richard was moved to the cornerback position at his request. There he made 112 tackles in the two years he had left.

In 2011, Richard Sherman was drafted by the Seattle Seahawks in the fifth round of the NFL draft. In his rookie season, he only started 10 games, but he did enough in those games to prove his immense talent, with 17 defended passes, 4 interceptions, and 55 tackles. Not surprisingly, he was appointed to the 2011 PFW All-Rookie Team.

In the 2012 season, the Sherman’s Seahawks memorably defeated the Arizona Cardinals 58-0, making it the biggest shutout in the club’s history. By the end of the season, Richard had scored a series of tackles and interceptions but was snubbed for the 2012 Pro Bowl. However, he was appointed to the more selective Associated Press NFL All-Pro First Team.

The next season was a season that will live forever in the hearts of Sherman and his teammates. They played good, aggressive football and the best passing defense in the league, earning them the name Legion of Boom. The Sherman’s Seattle Seahawks then won their first-ever Super Bowl. Richard also retained his place on the Associated Press NFL All-Pro First Team and was named to the 2014 Pro Bowl thanks to his eight interceptions, which are the league’s leading interceptions.

The 2014 season was a good season for Richard Sherman both on and off the field. With a new four-year contract worth $57.4 million, he became one of the highest-paid defenders in the NFL. He was also nominated for an ESPY award in the Best Breakthrough Player category. On June 16, he was announced as the official cover athlete for the Madden 15 football video game. The team battled their way back into the Super Bowl but were unable to keep their title and lost 28-24 to the New England Patriots. Sherman ended the season with 57 tackles, 4 interceptions, and 8 defended passes.

In the 2015 season, he ended the season with 14 defended passes, 50 tackles, and 2 interceptions. He was called to the Pro Bowl for the third time in a row. He also finished 20th in the NFL Top 100 Players of 2016, and the following season Richard would be 21st on the list. He also retained his Pro Bowl position for the fourth consecutive year in the 2016 season, which ended with a sour note for Sherman as he suffered an MCL injury from a sprain that he took to the 2017 season.

He was finally eliminated for the rest of the 2017 season after breaking his Achilles heel in the Seahawks’ game against the Arizona Cardinals in week 10.

No one really knows how long Richard was in a relationship with his partner Ashley Moss. But on February 5, 2015, four days after the Super Bowl, the couple welcomed their first child, a son they named Rayden. Almost four months later, in June of the same year, Sherman asked the question. The couple married on March 28, 2018, after having welcomed a second child, a daughter, Avery, two years earlier, on April 16, 2016.

Height, weight, and quick facts about him

In addition to his obvious talent, Richard’s manner with words and his penchant for verbal outbursts have promoted his popularity within the sport. In March 2013 he met sports columnist Skip Bayless on the talk show ESPN First Take. He called him an ignorant and selfish cretin.

During the 2014 NFL playoffs against the 49ers, Sherman wonderfully intercepted a pass from quarterback Colin Kaepernick, effectively winning the game for his team. He continued to make insulting gestures towards Kaepernick and his teammate Crabtree. He was fined $7,875 by the NFL for his antics.

Based on his own academic achievements, Richard founded a charity in 2013. The goal was to provide children in low-income communities with clothing and school supplies to help them achieve academic excellence. The charity is called Blanket Coverage – The Richard Sherman Family Foundation.

3. He is an investor in technological advancements

The player is obviously interested in the future of technology and of course in securing his finances before he retires. Richard invests in tech stocks and cryptocurrency. He is also an ambassador for FleetWip, a trivia app.