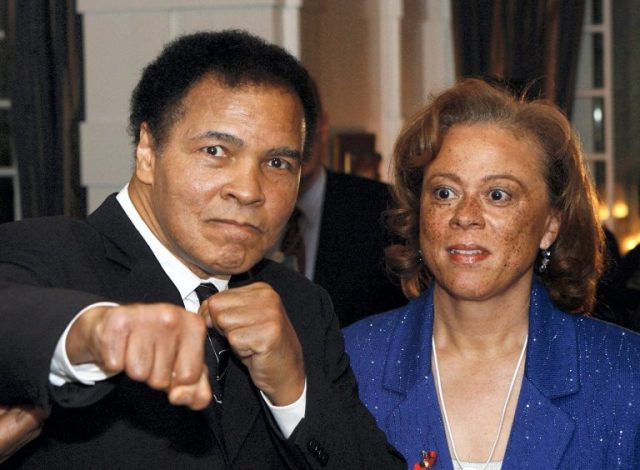 The greatest ever, he was. Muhammad Ali may have died, but his legacy will always live on. He set some of the best records in the history of boxing.

Ali’s career was not without its lows, but in the end, he overcame them and became an icon not only in sports but also in politics as an activist of the civil rights movement.

Follow us as we guide you through his life and shed light on his personal life, including details about his family, spouse, and children.

Cassius Marcellus Clay Jr. was the name Ali was given at his birth on 17 January 1942 in Louisville, Kentucky. However, in 1964 he would convert to Islam and take the name, Muhammad Ali since his former name was his slave name.

Ali never aspired to be a boxer at first, until an encounter he had as a 12-year-old when some tyrant made off with his bicycle.

Angry Ali was approached by a police officer named Joe E. Martin, who told him he could turn that anger into a boxer so nothing like that could ever happen to him again. Ali gladly accepted the offer and began training under Officer Martin.

It did not take long before his boxing skills earned him some recognition. For his first fight, which was broadcast on local television, he earned 4 dollars. Driven by the passion to earn more money, Ali tried to become even better in this sport. However, he did not neglect his education; he graduated from Central High School in Kentucky in 1958.

Ali began an impressive amateur career with 100 wins and 3 defeats. During the 1960 Summer Olympics in Rome, Ali further established himself by winning the gold medal in the light heavyweight class. At that time he was 18 years old. Later, in 1960, Ali became a professional.

In the first three years of his professional career, Ali remained undefeated with 19 victories, including 15 KOs. His first breakthrough as a professional boxer came in 1964 when he won the title in the linear heavyweight division as an outsider who had the odds against his favor, after beating the champion, Sonny Liston. Ali, then 22 years old, became the youngest boxer to receive the title of champion.

Throughout all this time, Ali remained an outspoken activist, not afraid to express his opposing views on political issues. Ali resisted America’s involvement in the Vietnam War and eventually refused to be drafted into the military, citing religious beliefs as reasons.

As a result, he found himself on the wrong side of the law and was convicted of conscientious objection to military service, losing his titles. Ali was to spend the next five years behind bars from 1966 to 1971, ending his aspiring career.

When he returned in 1971, Ali returned to the winning ways and won his first fight. On his second attempt, Ali regained the heavyweight world championship title after defeating George Foreman in 1974 in the fight “The Rumble in the Jungle”. Ali ruled unchallenged until 1978, during which time he defended his title against Joe Frazier in an epic game called “Thrilla in Manila” in 1975.

He lost the title to Leon Spinks in 1978, but won it back later that year in a rematch, becoming the only professional boxer to win the linear heavyweight championship three times.

Ali announced his retirement in 1979 but returned despite his poor health. In 1981 he finally hung up his gloves and recorded a total of 61 fights, 56 victories (37 by KO) and 5 defeats.

Ali was named Fighter of the Year by The Ring magazine, a record of 6 times, the highest record ever received by a boxer. Known for his trademark swear words and rhymes, Ali tried his hand at music and released 2 spoken word albums, including an r n b song. He received 2 Grammy nominations. Ali wrote 2 autobiographies and starred in several films.

Muhammad Ali founded GOAT LLC, which administered all of his endorsements and licensing agreements. In 2006, he sold 80% of the company for $50 million and kept the remaining 20%, which was estimated to generate an annual income of $5 million. At the time of his death, Ali was estimated to have a net worth of $50 million, but according to sources from 2012, his figures reached about $80 million.

Muhammad Ali was married four times in his life. He had a total of 9 children, including 2 sons and 7 daughters. His first marriage was in 1964 with the cocktail waitress Sonji Roi. Their wedding took place about one month after the date. However, the marriage was only short-lived, as they were divorced in January 1966. They had no children together.

In 1967 Ali married his second wife, 17-year-old Belinda Boyd, who converted to Islam after marrying Ali and changed her name to Khalilah Camacho-Ali.

They had four children together, including Maryum (born 1968), the twins Jamillah and Leban (born 1970) and Muhammad Ali Jr. born 1972, and after about 9 years together they divorced in 1976.

While still married to Khalilah, Ali began to engage in extramarital affairs, initially with a 16-year-old girl named Wanda Bolton. Ali married her in an unacknowledged Islamic ceremony while he was still married to his second wife. Wanda then changed her name to Aaisha Ali. Together they had a daughter named Khalilah Ali, born in 1974.

In another affair with Patrica Harvell, Ali had a daughter named Miya. Ali also cheated on his second wife with the 18-year-old actress and model Veronica Porsche.

After completing his divorce from Khalilah, Ali married Veronica in 1977. They had two daughters, Hana (married to UFC fighter Kevin Casey) and Laila Ali. Laila had a successful professional boxing career from 1999 to 2007. She won all of her 24 fights, 21 of them by KO.

Veronica and Ali were divorced in 1986. In the same year, Ali married his fourth wife Yolanda Williams. They adopted a 5-month-old boy named Asaad Amin. Later in their marriage, Yolanda, who was Catholic, converted to Islam. At the time of her conversion, she was in her twenties. Ali and Yolanda remained married until his death.

Ali was born the son of parents Cassius Marcellus Clay Sr (1912-1990) and Odessa O’Grady Clay (1917-1994). His family is predominantly of African descent with traces of Irish and English. His descendants can be traced back to the slaves of Antebellum South.

Ali’s father painted billboards for money while his mother worked as domestic help. He had five siblings, including one sister and four brothers. Together with his siblings, Ali was raised as a Baptist. His younger brother Rudolph “Rudy” Clay joined him to take the family name, Ali.