Kaylyn Slevin is many things – model, beauty queen, competitive cheerleader, dancer, trained gymnast, and actress. She has participated in a number of beauty contests and won the Miss Malibu Teen USA in 2017. In the Miss California Teen USA 2017 contest she won first second place. Slevin is very popular on social media, especially on Instagram, which is her favorite. Slevin boasts over 480 thousand followers on the gram.

Kaylyn Slevin was born on 28 December 2000 in Chicago, Illinois. When she was a little girl, about 4 years old, her parents started taking her to theater performances, and it wasn’t long before young Kaylyn developed a passion for theater acting. When she came home, she forced her parents to put themselves in the role and perform with her.

As a born dancer, Kaylyn’s parents enrolled her in a dance school at the age of 4, and at the same time, she began training as a gymnast. Kaylyn grew up with the ambition to become like the stars she saw in theatre performances and her parents supported her choice one hundred percent. She was also enrolled in acting classes.

To improve her chances of an entertainment career, Kaylyn and her parents moved to California. By the age of 9, Kaylyn was already walking the catwalk after being signed by FORD Models. When Teeki Swimwear launched a line of children’s swimwear in LA, Kaylyn was brought to the opening and closing of the show.

Kaylyn’s dancing skills caught the attention of the MSA Dance Agency, which accepted her as one of their clients. Next, she signed with Osbrink Agency for TV shows, movies, and commercials.

Her first film work to be released was the television movie The Incybers in 2010, and in the same year, she appeared in the short film The Beast.

ALSO READ: Is Twaimz Gay? What Happened To Him? How Old is He? Here are The Facts

In 2011 she appeared in D.I.N.K.s (Double Income, No Kids) and Bones. Her most notable appearance this year, however, was an appearance in three episodes of the web series Video Game Reunion. Her other work for 2011 included TV shows, Shake It Up, Breaking In and the TV movie My Freakin’ Family. Kaylyn appeared in one episode of Breaking In in 2012. Her first feature film was Ass Backwards, but her role was only a small one.

When Kaylyn opened her Instagram, she noticed that her report quickly gained fans, thanks to her fame from commercials.

Her first major pageant ever was Miss California Teen USA 2016, which made it into the top 20, and in 2017 she returned to the competition and came out as the first runner-up. Kalyn told the Daily Shuffle that winning the crown of Miss California Teen USA was part of her list. However, should she never be able to wear the crown, the first vice crown, and her Miss Malibu Teen Crown would serve as worthy consolation

Kaylyn Slevin is still active in the entertainment industry. In 2016, she became one of the cast members of Awesomeness TV’s reality TV show LA Story: The New Class. The show follows a group of friends who attend the same school. It includes adventure and of course a full dose of teen drama. It can also be seen in the dance battle of Awesomeness TV. 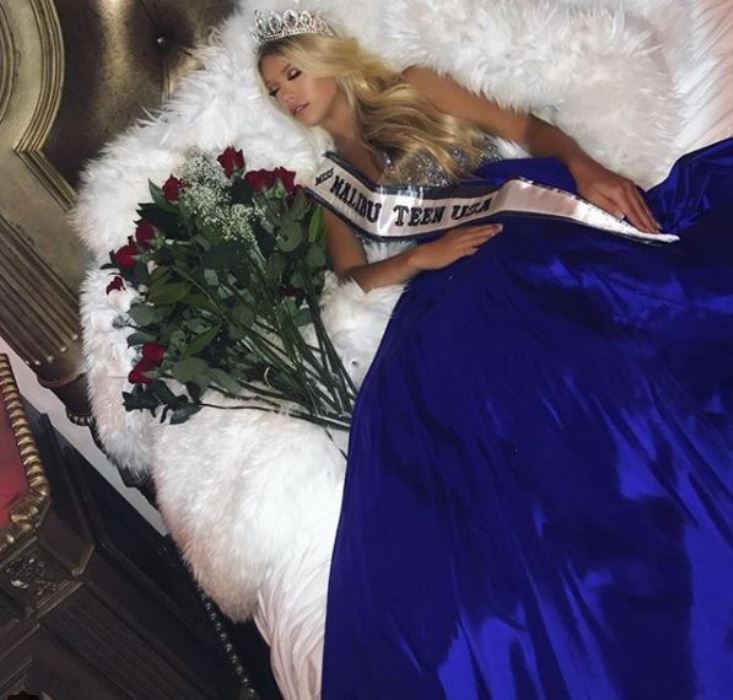 The parents of Kaylyn Slevin are Kristyn and William Slevin. As described in her biography above, her parents have contributed much to what she is today. Slevin seems to have been born with a silver spoon, but the details of her parents’ profession are not known to the media. An Instagram user who claimed to be close to her wrote a comment on one of Slevin’s Instagram postings, revealing that her father owned a car dealership. If there is any truth to this, it explains the luxury cars that Slevin often displays on her gram.

Other Facts About Kaylyn Slevin

Unlike most teenagers working in the entertainment industry, Kaylyn Slevin is not home-schooled. She attends a private Christian high school and tries to make sure that her occupation with entertainment does not distract her from her studies. Her goal is to maintain a straight A/B plus.

One of her dreams is to dance for a professional NBA or NFL team in California.

One of her favorite pastimes is to go on a long ride. Her favorite vacation destinations include Hawaii, the Fiji Islands, and the Maldives. And yes, she loves surfing.

Slevin aspires to own her own US-made swimwear line one day.

Kalyn enjoys volunteering and is actively involved in a number of charities, including The Hazing Prevention Organization, Heal The Bay, and Students Against Destructive Decisions, S.A.D.D.

Kaylyn Slevin has a relationship with Mycah Pittman.