Celebily
Home Celebrities Inside Look at Will Smith’s House, Career and His Interesting Family Life

As one of the greatest movie stars in the world, the success of his career has helped Will Smith enjoy some of the best things in life. Among the things he has achieved through his success is a spectacular house in Calabasas, California, and many other investments. Meanwhile, Will Smith has raised his now-famous children Jaden and Willow in his Calabasas mansion.

With his world-class entertainment skills, Will Smith has enjoyed success on television, film, and music. Today he is considered one of the most powerful actors in Hollywood, his net worth is estimated at 350 million dollars. Here is an insight into the life that Will Smith was able to lead thanks to his admirable wealth. Also, explore the family life of the Grammy winner.

A Look at Will Smith’s Remarkable Career

Will Smith once turned down a scholarship to the famous Massachusetts Institute of Technology (MIT) to pursue a rap career, a decision that many would boldly call crazy. But for Will, it was about his passion and his conviction to make his dreams come true. So despite the massive risk he took, it turned out incredibly well for him. 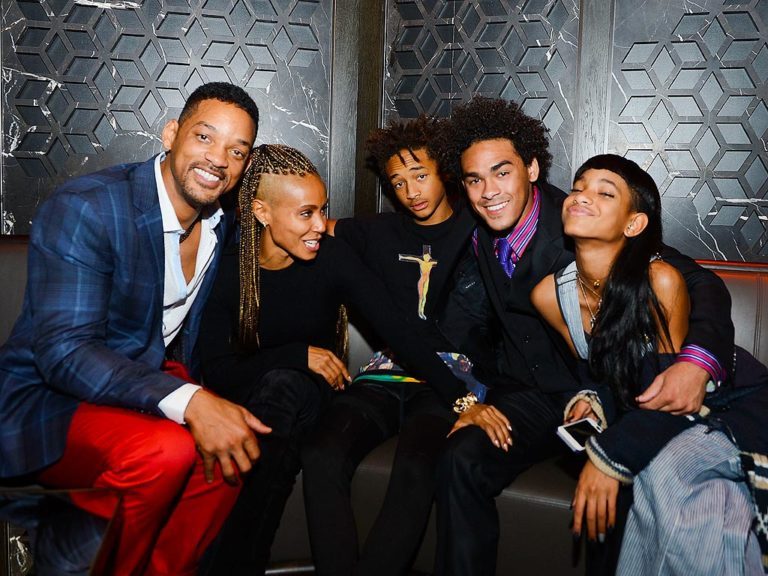 The Fresh Prince of Bel-Air began his rap career as one-half of DJ Jazzy Jeff & The Fresh Prince. Shortly before his high school graduation, he had his first hit track, Girls Ain’t Nothing but Trouble. The track’s success led to further successes, including the release of an album, Rock the House, and winning the first Grammy Award for Best Rap Performance.

The Fresh Prince of Bel-Air proved to be a massive hit for NBC and Will, and he became the springboard for his long and fulfilling career. But despite his success as a rapper, Will wanted a career as an actor. So in 1990, he began his acting career, both in fulfillment of his dream and as a means of escaping the powerful hands of the IRS, to whom he owed $2.8 million.

To date, Will Smith has appeared in more than 70 films, produced more than 30 films and television shows, and has written, directed, and composed many projects. His films have grossed more than $6.3 billion at box offices worldwide, making him one of the most bankable actors of all time.

Highlights of His Most Notable Film Credits

While the roles that Will Smith has rejected, such as the Neo in The Matrix, are among the most popular content on the Internet, he is equally iconic for several roles. Mike Lowrey in the Bad Boys franchise, Agent J in Men in Black, Robert Neville in I Is Legend, Captain Steven Hiller in Independence Day. Others include Chris Gardner in The Pursuit of Happyness and most notably Chris Gardner, who plays himself in The Fresh Prince of Bel-Air.

He Has Won Many Awards

Will Smith also has several awards from his music career, including seven nominations and four wins at the Grammy Awards. Although his name is not yet on the Hollywood Walk of Fame, he is a shoo-in for a place in America’s ultimate entertainment club.

After building such an amazing career with a net worth of $350 million, Will Smith has moved far away from the financial pressures that drove him to act. Will and the Smith clan live in one of the most beautiful homes in California, one that made it to the pages of the highly exclusive Architectural Digest. 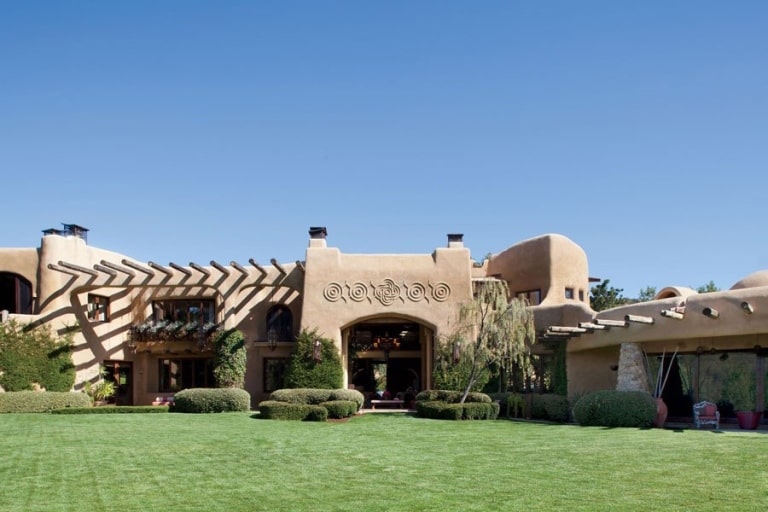 The house itself is located in a limited area in the mountains of Santa Monica, above Malibu, near Calabasas, California. A popular California neighborhood that is home to many celebrities including Drake, The Kardashians, and Katie Holmes. The 25,000-square-foot mansion is located on a 150-acre lot and was built over seven years. The interior of the mansion is in the Adobe style, with each room connected in a flowing design.

Will Smith’s 25,000 square foot mansion is worth $42 million and was designed by Stephen Samuelson in collaboration with architect Harry Perez-Daple. Built from the ground up just for the Smith clan, it is one of the cornerstones of the Smith family’s $100 million real estate empire, which includes properties in Hawaii, Utah, Malibu, and other parts of the world.

Features and Amenities of His Calabasas Mansion

Will Smith’s mansion Calabasas has nine bedrooms. It also has a billiard room, meditation lounge, home cinema, and recording studio, which is very convenient for Will and his son Jaden, who is also a musician. The studio is known as the place where his daughter Willow recorded her hit “Whip My Hair”.

Other features of Will Smith’s wondrous home include a lake, outdoor pool, basketball, volleyball, and tennis courts. The house also has a majestic entrance consisting of a carved wooden door imported and restored from a fort in northern India. 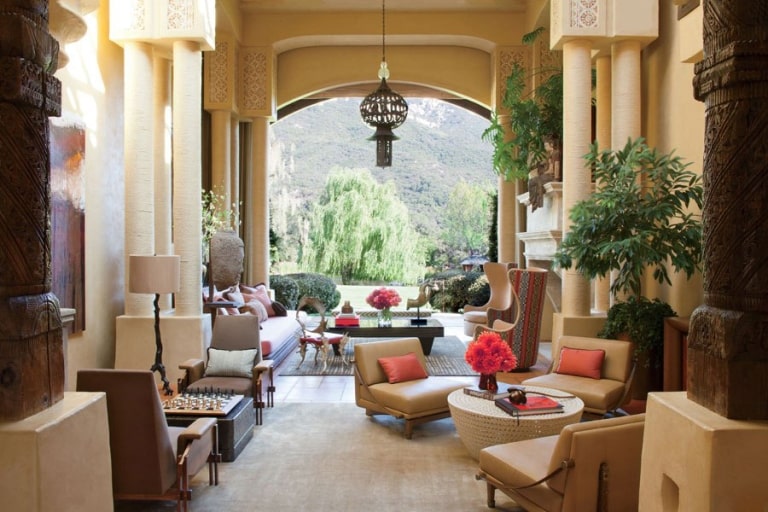 The Smith family must have a preference for living rooms, as they have at least three. Each room has at least three different types of seats. The room with the beautiful Brazilian rosewood chairs from the 1960s, and the floor decorated with a beige silk carpet, is a favorite.

Each house has a kitchen, but very few can match the splendor of Will Smith’s Calabasas residence. The kitchen is made of oak panels and has a huge island unit in the middle for great cooking, all in an open-plan layout. What’s more, every Hollywood house has such a kitchen, and they’re getting more creative every day. 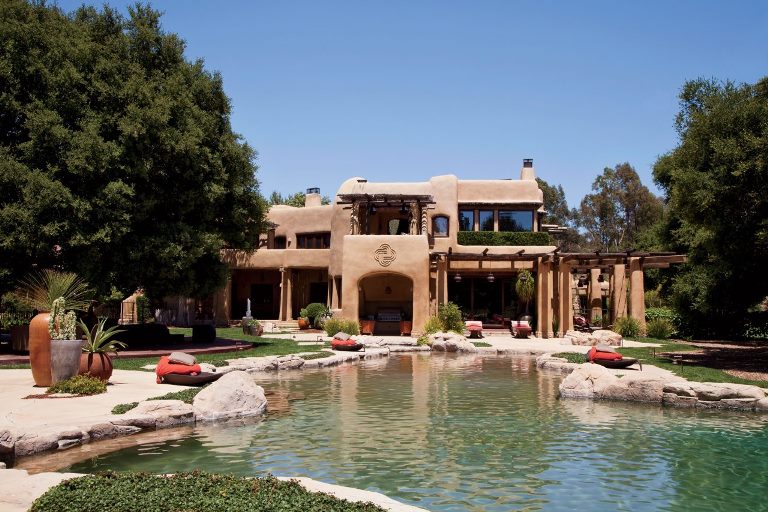 The Smiths enjoy a free-form pool that blends with the earthy, natural aesthetics of the house. Although Will Smith doesn’t spend much time in his house due to the nature of his work, he and his wife have created a place he will always enjoy returning to. All this is due to the success of his career, a custom-made exterior, and even more perfect interior design by interior designer Judith Lance.

Other Luxury Acquisitions of Will Smith

Apart from his house, Will Smith has some other expensive amenities. He owns a custom RV called The Heat. He reportedly bought it for $2.5 million, and the motor home is comprised of luxury items such as 14 TV screens, 360-degree video surveillance, and a bathroom for $25,000.

Smith and his wife also did not hesitate to spend the money on their children. Jaden and Willow both own a Tesla Model X and a Porsche Cayenne Turbo. As for the parents, they are a little more reluctant to buy a car. However, it is assumed that Willow has an extensive car collection, which includes a Maybach, Escalator, Navigator, Bentley, and Mustang. Surprisingly, although one would expect the family to own a private jet or yacht, this is not the case. However, it is known that they spend ridiculous amounts of money to charter them whenever they need them.

Everything You Need to Know About Will Smith’s Family

On the surface, Will Smith is a blessed family man in addition to his wealth and career. Despite the failure of his first marriage to Sheree Zampino, he was very successful with his second attempt with Jada Pinkett Smith. The two have been married since 1997. They share two children – Jaden and Willow, and he has a third child, Willard from his first marriage. 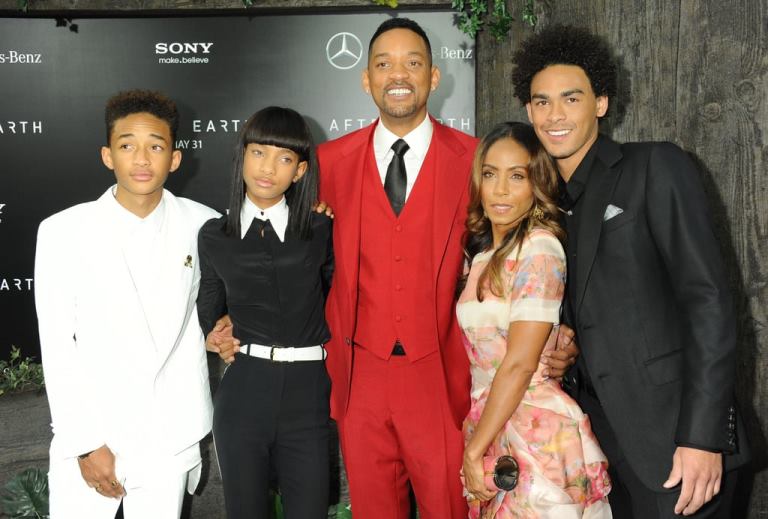 Except for Willard, every member of the Smith family is involved in show business, in one capacity or another. Will and Jada are actors, Jaden is an actor/musician and Willow is a musician/TV personality.

Even though Willow and Jada have been together for a long time, it has not been without its controversies. The two were accused of cheating on each other at one point.

However, the lack of a major conflict caused by the rumors led to speculation that the couple is in an open marriage. Although they have not explicitly confirmed this, the interpretation of the couple’s “marriage” from various interviews, such as this one or that one, points in this direction.

Apart from their redefinition of marriage, Will Smith and his family have also been associated with the controversial religion of Scientology. The religion includes a few elites from Hollywood, such as Tom Cruise, Elizabeth Moss, and John Travolta.

The truth, however, according to Will Smith, is that he is not a member of the religion. However, he has some nice things to say about it, such as: “I just think that many of the ideas in Scientology are brilliant and revolutionary and not religious. The fact is that Will Smith and his family are not religious.

Quick Facts About Will Smith