Celebily
Home Celebrities How Did Coyote Peterson Achieve Fame? What Is His Net Worth and... 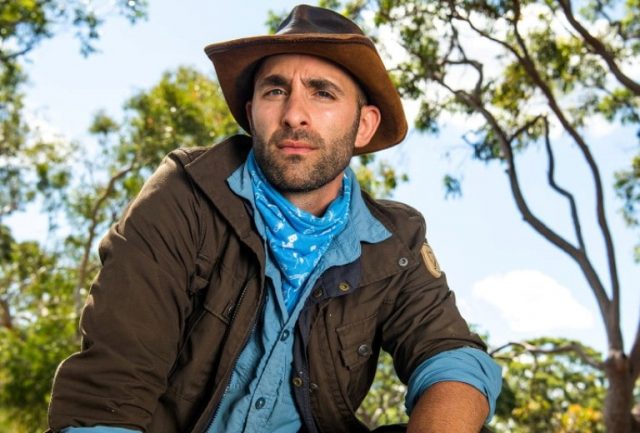 Have you ever taken a sting of the hangman wasp or a tarantula-hawk wasp (ouch!)? It’s true what they say, that you don’t see someone every day who is brave enough to do the things that scare many others – but when you do, it’s only natural that you want to find out every detail about that person – and Coyote Peterson is such a person. He captures these painful moments (from the bites/stings) and gives his viewers a representative experience on his YouTube channel.

He is someone you probably know best from his wildlife adventures on YouTube. For most of his life he is in front of the camera, but how much do you really know about the star? This article will educate you about a whole range of things about the wildlife sensation on YouTube. So keep reading to get all the information you need.

Who Is Coyote Peterson?

Peterson is an American adventurer and a YouTube personality. You can’t exactly call him a biologist, considering that he didn’t take a course in this field at university. A wilderness educator or animal expert is closer to what we believe he really is, even though he has no formal education in the natural sciences or even a certified animal education.

Coyote Peterson was born September 1, 1981, in Newbury, Ohio, but Coyote, as cute as it sounds, is not his real name. Actually, he was born Nathaniel Peterson. However, the reason for the name change may not be far-fetched. Coyote, an animal that belongs to the same family as the wolf, talks more about his preferences and seems to be the best way he could go. And, we could not agree less. 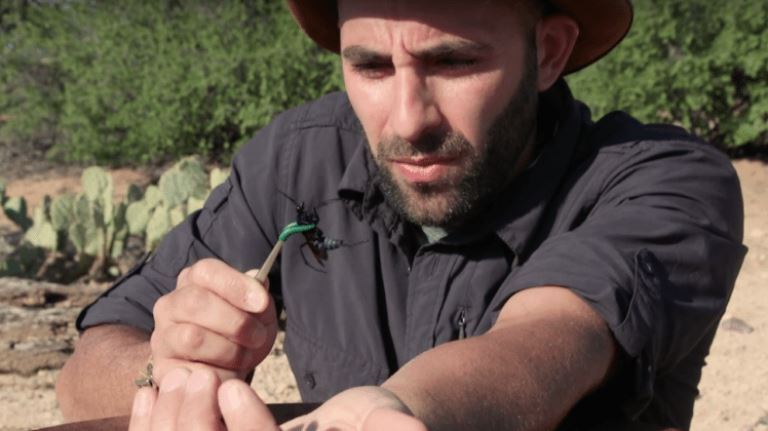 A small examination of the origin of the well-fitting name shows that his mother gave it to him when he wouldn’t stop chasing Roadrunners like the coyote from the cartoons, while the Roadrunners were hunting Horned Lizards.

The world is a natural learning environment, and children who grow up like sponges immerse themselves in the things that excite them easily. For some, especially boys, these are video games, while for other toys and music are trumps. In the case of Nathaniel Peterson, however, his interest was more of a rarity than a cliché. As a boy in rural Ohio, he developed an interest and passion for animals and adventure.

He loved to explore nature and catch many different animals like alligators, frogs, and rattlesnakes in his garden. He caught his first animal, a toad when he was 4 years old. His love for nature led him to Ohio State University after graduating from Notre Dame-Cathedral Latin High School. His quest for storytelling led him to begin film studies, which he completed in 2004.

Coyote Peterson’s love of creatures and video productions reached a melting point in 2009 when he and his daughter met a snapping turtle, which eventually led to a YouTube channel called Brave Wilderness. He is not only an avid researcher and animal lover, but also a producer and author. He has written four books, including The King of Stinging.

Coyote Peterson Journey To Stardom: How He Built His YouTube Empire

Coyote Peterson is an open-minded person when it comes to his career, after all, it is about showing people how much he is in contact with animals. Since his childhood, which was fascinated by animals, Peterson has made a career out of uncertainty.

In front of the camera, he cares about the wildest animals in the world, from stinging insects to giant lizards to bear cubs. His goal is to go the extra mile to educate. When you do something so well, you naturally want to share this experience with others. So the animal whisperer would join the video-sharing community in 2014 to extend his reach. 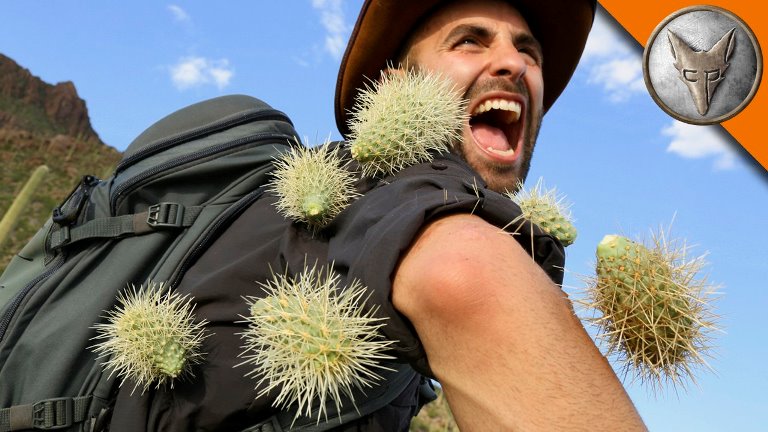 After honing his natural storytelling skills during his film studies at college, he teamed up with his business partner Mark Vins to create the Brave Wilderness brand. On September 8, 2014, the duo launched the Brave Wilderness wilderness adventure channel. Through the brand, he has produced several series including Breaking Trail, Beyond the Tide, Dragon Tails, Coyote’s Backyard, Beyond the Tide, and On Location. Breaking Trail won the 2015 Emmy Award for youth/environmental programs, making Coyote Peterson famous.

Brave Wilderness has become one of the most-watched wildlife shows and has gained millions of followers. The station has received two Guinness World Records: Most Subscribed YouTube Channel dedicated to animals and Most Watched YouTube Channel dedicated to animals. His unmistakable enthusiasm for the creatures he presents to his audience has taken him to the latest high point of his career: a television show on Animal Planet entitled Coyote Peterson Braves the Wild, which could make him a world star.

Through his expeditions and encounters with some of the most dangerous, cuddly, and misunderstood animals in the world, Coyote Peterson has achieved international fame. With two Guinness World Records, more than 3 billion hits, and 15.5 million subscribers, Brave Wilderness has also become a one-stop shop for a wild world of adventure and amazing up-close encounters with animals.

Have You Ever Wondered If Brave Wilderness Is Fake?

You are not alone. After all, what human being in the right state of mind would let animals and insects sting or bite him? Coyote Peterson does just that in his wildlife adventure show Brave Wilderness. While we might see him as crazy and feeding with death, the YouTube star sees this as edutainment – he educates his audience and entertains them at the same time.

Peterson travels around the world trying to get animals and insects to sting and bite him (strange) – and to give the audience a representative experience. Given his wild adventures, some people actually think he’s better than the late crocodile hunter Steve Irwin, although he simply hasn’t been famous long enough to be seen as such.

He has shown exciting animals on the show, from stingrays and snapping turtles to grizzly bears, crocodiles, tarantulas, rattlesnakes, and hangman wasps. Even more bizarre is the fact that Preston actually got stung by the wasp in Costa Rica. That’s just crazy, right? In his opinion, the pain he felt from the wasp sting was the strongest he’s ever felt in his career. He had been stung by other insects such as the fire ant and the Japanese giant hornet, but the wasp remained his most painful pain.

In addition, he and his crew – co-founder and director of Brave Wilderness, Mark Vins, and wildlife biologist Mario Aldecoa – have kissed moose, played with an ocelot, hunted crocodiles, and hung out with stingrays. Yet it is his stinging and biting stunts that have led to questioning the credibility of the show.

The self-proclaimed extreme-field zoologist has admitted that there is no real training you can ever go through when it comes to interacting with wildlife, but that it is a matter of trial and error. In order to get closer to the animals and interact safely with them, the animal expert says, one must practice and refine the skills one has acquired over the years. While some people bring him down for all these stunts, his main intention is to give his audience, whom he calls the “Coyote Pack”, an exciting opportunity to learn something new.

With or without a script, Coyote Peterson offers both education and entertainment through his adventures. He brings his fans closer to the most popular, bizarre, and misunderstood creatures known to man. The greatest reward for him and his crew, he says, is when they discover through the comments section how their series inspires people, especially children, to love the animal world.

Considering this, one has to admit that his series is actually well planned, well informed, and very entertaining. His fans believe that if he can survive all these dangers around him, he will become the most famous nature show host ever.

How Much Money Does He Make?

in his career. His show “Brave Wilderness” is one of the most-watched nature shows, which is currently not easy to do. If the numbers don’t lie, his more than 15 million subscribers and more than 3 billion viewers are great proof of the wealth he has accumulated during his career.

In addition to his YouTube revenues, he also draws on his online store, which is linked to his website and books. It is clear that he earns top money. His net worth is estimated by various sources at $2 million.

With All The Risks, Does He Even Have A Family?

Oh, yes! He has one. It’s no secret Coyote Peterson is a married man. He’s completely off the market, but unlike the other aspects of his life, he keeps his family and private life under the radar. There’s not much information on his wife, but we know for sure that he’s married. Not only is he a married man, but he also has a daughter known as Pup (as in the youth of a coyote; but no real name) Peterson. She was born in 2008.

The pup was there at the very beginning of her father’s YouTube adventure. She was one of them when Coyote discovered the snapping turtle that inspired his career on camera. Since then she has gone on adventures with her father and has captured a number of her own animals. According to online sources, there are several videos on Coyote Peterson’s YouTube channel showing his daughter helping him host the show.

The father-daughter duo is an incredible couple. When Coyote is not on one of his trips, they wander around the pond in their environment looking for frogs and turtles. However, when he is out and about, he makes sure he shows her his love by calling her daily and sending her a text message. Coyote Peterson is an amazing family man.

Little Peterson is young and fearless like her adventurer father and has studied various insects and reptiles under his supervision. She is true proof of the saying that the apple doesn’t fall far from the tree. We can only hope that she will continue to follow her dreams as her father did, or be content with another career.