Many people who lived and walked the earth at the time when Frida Kahlo did the same is long forgotten and rarely remembered even in history, but because of her incomparable artistry and her impressive works of art, paintings, and costumes, Frida Kahlo still lives among us, as her legacy is still highly sought after and well preserved today.

Frida Kahlo breathed her last more than half a century ago, but in this article, we will take you through the times and events of her life, through her paintings, artwork, and unique costumes, without leaving out who she married and the dramas she experienced.

Frida Kahlo was born on July 6, 1907, and named Magdalena Carmen Frida Kahlo y Calderón in Coyocoan, Mexico City, Mexico, after her father, a professional photographer of Hungarian and German descent, and his wife Mathilde, who is half American and half Spanish. Frida had three sisters, two older and one younger. 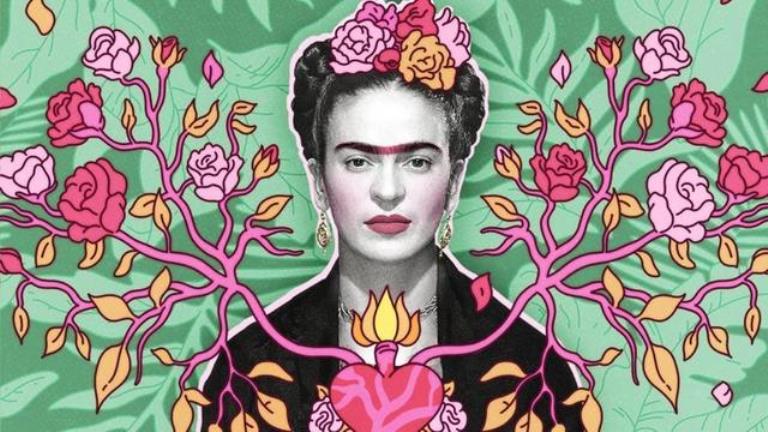 When she grew up, at the age of 6, she suffered from polio, which caused her to be bedridden for 9 months, severely affecting the growth of her right leg and foot; they were thinner and caused her to limp when walking. However, life continued as normal as it could be for little Khalo.

She attended the National Preparatory School in Mexico City (from 1922), where she became famous for her openness and courage. With these innate qualities, Frida Khalo soon joined a student political movement, where she met and loved the leader of the group, Alejandro Gomez Arias. On one occasion (1925), while she was traveling with him, her bus was involved in a fatal accident in which Frida Khalo was seriously injured. She had to undergo a slow and painful recovery, and at that time she began to teach herself to paint.

As she recovered, she became increasingly active and soon joined the Mexican Communist Party (PCM). At this party, she met (for the second time) her future, stormy husband, Diego Rivera, to whom she showed her paintings and who gave her encouragement for her good works.

Frida Kahlo had first met Diego Rivera at the National Preparatory School in Mexico City, where he was working on a mural entitled “The Creation”. She often looked at it and fell in love not only with the work but also with the artist himself; according to reports, she once told her friend that one day she would marry Diego Rivera.

They met again in 1928 when Frida Kahlo asked the more experienced artist Diego Rivera to evaluate her work. During this meeting, it happened that the two found each other sympathetic and soon began a romantic relationship. The following year, despite their mother’s objection, they were already husband and wife. Because of her husband’s profession, they moved to San Francisco (1930), New York City (1931), and Detroit (1933).

After Diego’s work in America, they returned to Mexico and lived in San Angel, Mexico. It was at this time that the love between the two began to fade when Frida became so tired of Diego’s promiscuity that he even had an affair with one of her sisters. They separated many times but got back together just as often. Even when they were officially divorced in 1939, they were together again as husband and wife in 1940, at least in public, even though they began to see other people separately. Their house at that time consisted of individual separate living quarters connected by a bridge.

Every true artist is remembered with his or her works when they are long gone because Frida Kahlo is not only remembered but also celebrated in this generation and probably in the generations to come.

Frida Kahlo lived a life in which everything revolved around art. Many of her works were self-portraits, most of which had surreal qualities that a restless mind could hardly put into words. But for profound minds who saw her works then and still see them today, the message that the writer tried to convey in colors and shades was clear.

Among her remarkable paintings are Frieda and Diego Rivera (1931), which was shown at the 6th Annual Exhibition of the San Francisco Society of Women Artists. Next was Henry Ford Hospital (1932), which depicted her second miscarriage, The Suicide of Dorothy Hale (1939) as a gift to Hale’s grieving mother, The Two Fridas (1939), where she portrayed the unloved and beloved versions of herself. She told the story of her physical challenges with The Broken Column (1944), in which her spine was portrayed as broken, and the medical procedures she underwent without success to repair it.

In a similar way, Frida, like every artist who had a large following in her time and even today, creating a sense of fashion that has not died out, but is now even priced and celebrated. More than half a century after her death, her clothes were discovered locked in a storeroom. She often dressed in Mexico’s matriarchal Tehuantepec embroidered dresses worn by women; she wore long skirts and tops and corset-style blouses to hide her many surgical scars, while her boots were often brightly colored and usually pink. From her self-portraits and paintings, Frida was also known for adding flowers to her hair and wearing beautiful jewels as costume pieces.

Unfortunately, death happens under the saddest of circumstances, and Frida did not grow very old. She had a bone transplant in 1950, which unfortunately became infected and led to her being bedridden most of the time. As much as she could, she used squats and a wheelchair to move whenever her strength allowed, but slowly her health degenerated. In August 1953 her right leg was amputated at the knee, her health deteriorated, and worse, her husband’s countless love affairs did not help her. In her last days, she began to draw skeletons and angels in her diary, as she was confined to bed with bronchopneumonia.

Her last drawing was a black angel with the words: “I am joyfully waiting for the exit – and I hope never to return – Frida”. On July 13, 1954, at the age of 47, after suffering a high fever, she found her nurse dead on her bed. On July 15, 1954, her funeral took place in the Panteón Civil de Dolores. Her husband designed the Frida Kahlo Museum in her honor and opened it in 1958, one year after his death in 1957.